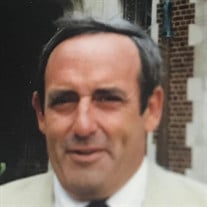 William John Harkness II passed away peacefully on May 21, 2021, after a long illness. He was surrounded by his wife and children. Bill was born on August 30, 1946 in Glens Falls, NY. He was the owner of Harkness Services, LLC a tree service company for close to 40 years. Bill was an avid sportsman. He started playing hockey as soon as he could walk. He played throughout his childhood and adolescence, and was named most valuable player at Amity High School. In his 20's he continued playing hockey for a semi-pro league in New York State and Canada. He later coached hockey at Southern Connecticut State University. Bill passed his love of hockey and lacrosse on to his son, Seth, who also played throughout his school years. Bill shared a family farm in Johnsonville, NY where he enjoyed fishing, target shooting and camping. He also loved to go deep sea fishing off Cape Cod with his family. Bill enjoyed a good steak and loved to cookout. Because of Bill, half of Bethany and Woodbridge became hooked on Charlie Hotdogs, from Famous Lunch, a restaurant in Troy, New York. He would take many road trips there to bring back orders for his friends. Bill had a quirky sense of humor and was also a big tease (mostly to his wife). He loved a good laugh. Bill is predeceased by his parents William A.R. Harkness and Patricia Devore Harkness, and a sister, Brenda Burr. He is survived by his wife, Diane Harkness, sons William (Kirsten) Harkness of South Carolina, Seth Harkness of Bethany, and daughter Amanda (Dean) Harkness of New Haven. He is also survived by his two sisters Elizabeth Harkness of Johnsonville New York, Cary Harkness of Colorado, granddaughters Emma and Colleen, and their mother Susan, grandsons Will, Gavin and Soren. He will also be missed by many nieces and nephews Calling hours will be Saturday, May 29,2021 from 3:00-7:00 pm at Sisk Brothers Funeral Home, 3105 Whitney Ave., Hamden. Burial will be private. www.siskbrothers.com

William John Harkness II passed away peacefully on May 21, 2021, after a long illness. He was surrounded by his wife and children. Bill was born on August 30, 1946 in Glens Falls, NY. He was the owner of Harkness Services, LLC a tree service... View Obituary & Service Information

The family of William John Harkness created this Life Tributes page to make it easy to share your memories.

Send flowers to the Harkness family.