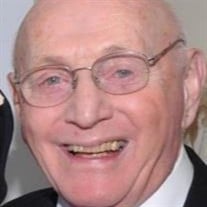 William Thomas Donohue, 85, lifelong resident of the Goatville section of New Haven, passed away peacefully surrounded by his family on August 25, 2020 – five days following his 60th Wedding Anniversary. Bill was born on January 19, 1935 to the late Edward L. and Margaret (Waldron) Donohue. He was a graduate of Worthington Hooker School, Wilbur Cross High School (1952), and Providence College (1960). He proudly served in the United States Navy. Bill worked for the City of New Haven as the Redevelopment Director, Giordano Construction Company, and New Haven Board of Education Adult Education in conjunction with Crossroads, Inc. Bill’s lifelong dedication to helping and serving others involved him in countless projects and organizations -- too many to list. He collaborated with many passionate people to form and build upon a variety of charitable, community and civic-centered programs. Some of his most treasured experiences with people he loved included his position as a founding member of the New Haven Road Race for which he served as President for decades to follow. He was the President of the Greater New Haven Pee-Wee Hockey Association where he coached and refereed all four of his sons. Bill was a dedicated member of the Providence College New Haven Club and honored recipient of its Veritas Award. The love of his Irish heritage consumed many of his passions, including memberships with the former Knights of Saint Patrick, the Irish American Community Center, and was the recipient of the AOH Friendship Award. He was a lifelong parishioner of New Haven’s Saint Joseph Church, where he served in all aspects of his Roman Catholic faith. Bill will be missed for his legacy of a revolving door of family, friends, and strangers alike, who sought his unique and compassionate counsel. Bill was predeceased by his beloved first born son, William Thomas Donohue, Jr., his cherished parents Edward L. and Margaret (Waldron) Donohue, and his brothers, John and Eddie. He leaves behind his adoring sister, Marge (Jack) Hansen. Bill was a devoted husband to his loving wife Marguerite (Mulroy) and a self-sacrificing father to James (Sarah) Donohue of Vernon, Brian (Dianne) Donohue of Guilford, Kevin (Holly) Donohue of New Haven, and Eileen (Brian) Kenney of Madison. He will be forever remembered for generations to come by his fifteen grandchildren Jenna, Bruce, Jimmy, Megan, Colleen, Marguerite, Brian, Liam. Aidan, Riley, Erin, Jane, Nora, Billy, and Ned, and his three great-grandchildren Jay, Elliott, and Andrew. Bill was cared for by so many warm healthcare workers and companions, most especially his kindhearted sister-in-law Mary Mulroy and his attentive home health care aide Sheila Hagwood. A special thanks to the NP12 Supportive Care Unit team at Yale-New Haven Hospital for their kind and compassionate care. A Mass of Christian Burial will be Celebrated Monday at 10 a.m. in St. Joseph Church. Masks will be required by all that attend. Burial in St. Lawrence Cemetery. Calling hours are Sunday from 3 - 7 p.m. in Sisk Brothers Funeral Home 3105 Whitney Ave. Hamden. Masks are required. In lieu of flowers, donations may be made to the William T. Donohue, Jr., ’79 Memorial Scholarship c/o Notre Dame High School, 1 Notre Dame Way, West Haven, CT 06516. To leave an online condolence please visit www.siskbrothers.com

The family of William Thomas Donohue created this Life Tributes page to make it easy to share your memories.

Send flowers to the Donohue family.