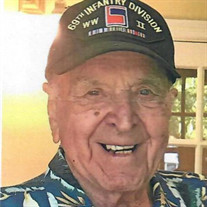 William Currier (Bill) passed away peacefully at Yale New Haven Hospital, St. Raphael’s Campus on Sunday, April 26, 2020. For the past four years, Bill has been a resident at Benchmark Assisted Living in Hamden, CT where he made many good friends and had a happy life. Bill was born on July 31, 1918, in West Haven, CT to his late parents, Mae Richards Currier and Henry Judson Currier. His sister, Lillian Currier Poole, passed away in 1978. Bill’s parents passed away when he was quite young but he continued to grow up to be a spectacular and independent young man. He graduated from West Haven High School when he was 15, worked at Savin Rock Amusement Park in West Haven for a few years and then continued his education at New Haven Community College where he received an Associate’s Degree in Business. On December 7, 1940, Bill married his beloved Dolly (Viola) Lepore and they enjoyed their “love nest” marriage until 2001 when Dolly sadly passed away. They shared a life of devotion and left an example for all who followed. In 1943, he went to war. Part of the 69th Infantry, he was a decorated WWII combat veteran whose courage on the front lines liberated Nazi Germany and helped save the world. He watched friends die next to him. He was awarded the Bronze Star for valor and exceptional bravery. He earned the Combat Infantryman Badge, the Marksman Badge and his unit was awarded the Presidential Distinguished Unit Citation for demonstrating "exceptional heroism in action against an armed enemy". When he returned from the war, he began a career in machining and machine tools at Botwinik Brothers in New Haven, CT. After a short time, Bill started his own Machinery business, Currier Machine Sales which, at its peak, grew into the largest automatic screw machine dealership in the world. Bill ran Currier Machine Sales for almost 60 years. He was a man whose unwavering work ethic covered ten decades. With an innate spirit of perseverance to provide a better life for his family, he started from nothing and ran his own business until he was 98 years old. Bill was also an avid golfer later in life. Like everything else in his life, he tackled it with unbridled passion. In his later years, golf was his way of enjoying the act of being with others. He won the State of Connecticut Seniors Amateur Championship. Bill was a member of New Haven Country Club for 43 years. Bill derived his deepest satisfaction from spending time with family and friends. Bill and Dolly created a travel group with their friends called "The Fun Club", whose mission was to travel to new and interesting destinations. Bill traveled throughout the world for both business and pleasure. He and Dolly spent many winters in Ft. Lauderdale Florida and also had a passion for Vermont where he vacationed and owned a home on Lake Rescue in Ludlow, Vermont for many years. Bill created a magical life for his children and grandchildren and never missed an opportunity to teach them a life lesson or pass along his valuable advice. Bill leaves behind two daughters, Annette (Fran-deceased) Forte and Lorraine (Butch) Gallagher both of North Haven, CT. He has 6 grandchildren, Fran (Janna) Forte, Jennifer (Timothy) Tangari, David (Cailin) Gallagher, Jeffrey (Jen) Gallagher, Kimberly (Andrew) Tripaldi and Gregory Gallagher. Bill is survived by ten great-grandchildren, Francesco, Lucia and Massimo Forte, Timothy, Julia and Mia Tangari, Charlie, Chase and Lilly Tripaldi and Owen Gallagher. He also left behind nieces, nephews, cousins and many, many friends Despite a lifetime of challenges, Bill was a living, breathing supernova of optimism. He always saw the good. His boisterous and loud laugh and his strong way of shaking your hand with both of his hands and arms until he pulled you into his space – a trademark, for sure! Bill lived a huge life. It was full, and textured and rich. He always kept his “4Fs” front and center: Family, friends, faith and fun. He was a legend in the way to love…unconditionally and a legend in the way to live …authentically. The world was a better place with our Bill in it and the world will never be the same without him. Rest in peace Dad, Gramp and Papa! We will plan a service to celebrate his life once we can all be safely together again. In lieu of flowers, please consider a donation to the Wounded Warrior Project (www.woundedwarriorproject.org) in honor of Bill – it was his favorite charity and one he supported for many years. Arrangements are with Sisk Brothers Funeral Home, 3105 Whitney Ave., Hamden. www.siskbrothers.com

William Currier (Bill) passed away peacefully at Yale New Haven Hospital, St. Raphael&#8217;s Campus on Sunday, April 26, 2020. For the past four years, Bill has been a resident at Benchmark Assisted Living in Hamden, CT where he made many good... View Obituary & Service Information

The family of William R Currier created this Life Tributes page to make it easy to share your memories.

Send flowers to the Currier family.