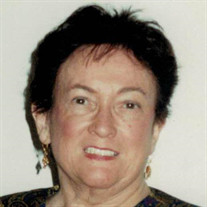 In Branford, Aug. 6,2016, Virginia M. Garvey, 90, a resident of Evergreen Woods, North Branford, formerly of Stamford. Survived by a sister Marilyn G. Trotta of Branford and nieces and nephews, Lee Anne Hicks of Branford, Leslie Schwab of Branford, Thomas Garvey of NJ, Patricia Jaumin of Fairfield, James Garvey of NC, Kathleen Davies of Cheshire and Frederick J. Trotta of Guilford. She was predeceased by brothers Dennis Garvey and Robert Garvey , a niece Denise Manahl and two nephews, Dennis Garvey Trotta and Joseph F. Trotta Jr. She was born Feb. 18, 1926 in New Haven a daughter of the late Dennis J. and Marie McGowan Garvey, was a graduate of Hamden High School and attended UCONN where she graduated in 1947 with a BS degree in Dietetics/Home Economics. While in college she was a very active student leader, joining Kappa Alpha Theta Sorority and was on the editorial board of the Nutmeg yearbook for all four years. She continued her association with the University after graduating and was awarded the Distinguished Alumnae Award from the School of Business in 1981 and also the UCONN Centennial Award in recognition of distinctive accomplishments and contributions to the University. Her professional career led her to work in several fields including working as an account manager for General Electric, working as an AD Executive for Ogilvy and Mather Co. in NYC and in Public Relations for several firms including Young and Rubicam, and Dudley, Anderson and Yutzy . She also was a partner in the public relations firm, Emmanuel ,Kerr and Kilsby in Greenwich. Virginia loved to travel and had made many trips to the Caribbean and several trips to Ireland. . After her retirement she remained quite active in business and community activites and was quite proud of her participation with the Mill River Collaborative in Stamford. Funeral from Sisk Brothers Funeral Home, 3105 Whitney Ave., Hamden, Wednesday morning at 10:30. Mass of Christian Burial in St. Rita Church at 11:00. Burial will follow in St. Marys Cemetery. Friends may call prior to the mass on Wednesday morning from 9:00 - 10:30. Memorial contributions may be made to Kappa Alpha Theta Philanthrophy Fund, 8740 Founders Rd., Indianapolis, IN 46268 or the UCONN Women's Health Center, Student Union,4th Floor, 2110, Hillside Rd., unit 3118, Storrs, CT 06269-3118. www.siskbrothers.com

The family of Virginia M. Garvey created this Life Tributes page to make it easy to share your memories.

Send flowers to the Garvey family.