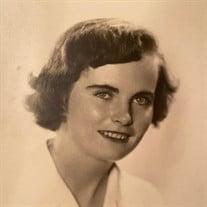 Veronica Connors Hendrick of Orange peacefully passed away, at the age of 88, after spending a joyful day surrounded by her loving family. Ronnie, as she was known, was the child of Anna Teresa Enright and Thomas Joseph Connors, both of New Haven. Ronnie was married to William J. Hendrick, Jr for 39 years. Together, they had three children: William (Bill) T. Hendrick, Michael (Mike) E. Hendrick (wife Denise), and Veronica (Vicki) Hendrick, Ph.D. Ronnie was the proud grandmother of Bill’s three children, Morgan, Will, and Adam Hendrick of Madison, as well as Mike’s two children, Amanda and Ryan Hendrick of Bethany. Ronnie is survived by her beloved brother Leo M. Connors (wife MaryAnn Silvestrini) of Hamden and was predeceased by her sister Ann Connors Crowley (husband Kenneth) and her brother Thomas Connors, Ph.D. (wife Maria Elena Velez). Ronnie graduated from Lauralton Academy and went on to receive her teaching degree at what is now Southern Connecticut State University. She earned her Master’s degree at Fairfield University, and then went on to earn two 6th year degrees: one in Special Education and the other in Reading. She worked for almost 40 years at the Milford Board of Education, only leaving early to take care of her husband, Bill . When she did retire, she had been the Reading Coordinator for the Milford City school system. Ronnie was a vibrant member of her community. She was named a Living Treasure for her work as a volunteer in Orange and she was and active member of the Orange Town Council overseeing disability issues and accommodations. Ronnie was also very involved as a past president of with the Orangewood Woman’s Club, the Holy Infant Woman’s Guild, and a member of the Lions Club. Her volunteer work would fill the page—but the most tender part of her work focused upon those who were unable to read or write. Even in her last year of life, she was trying to figure out a way to facilitate life for those who could not read or write due to hearing or vision loss.Ronnie called it “The Letter Writing Club”. Ronnie’s greatest joy was being involved with the community and helping those around her—so, as her final wish, instead of donations or flowers, she would like you to “join a club” and help your friends. A Mass of Christian Burial will be celebrated Friday, Dec., 4,2020 at 12:00pm in Holy Infant Church, 450 Racebrook Rd., Orange. Interment will be private. Calling hours at Sisk Brothers Funeral Home, 3105 Whitney Ave., Hamden will be Thursday, Dec. 3,2020 from 4:00-7:00pm. Masks and social distancing will be required at both the Funeral Home and Church. www.siskbrothers.com

Veronica Connors Hendrick of Orange peacefully passed away, at the age of 88, after spending a joyful day surrounded by her loving family. Ronnie, as she was known, was the child of Anna Teresa Enright and Thomas Joseph Connors, both of New... View Obituary & Service Information

The family of Veronica Connors Hendrick created this Life Tributes page to make it easy to share your memories.

Veronica Connors Hendrick of Orange peacefully passed away, at...

Send flowers to the Hendrick family.