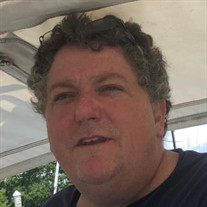 Timothy W. Pope of Hamden, Connecticut passed away unexpectedly in his home on March 23, 2022. Born in New Haven, Connecticut on July 3, 1966. Tim was 55 years old, far too young. Timothy, shortened to Tim by friends and family, leaves a loving wife Shirley and three children: Amanda, Zachary, and Melissa. Tim was predeceased by his father John W. Pope, who passed away in 2017. He is survived by his mother Fern Pope, now of Florida; his brother David Pope (wife Nadine) of Rhode Island; and Dan Fiorillo (wife Heather), a brother to Tim (and David) by choice. Tim is also survived by sister-in-law Bernice Miller and husband Eric Miller, nieces Kristen Anderson and husband Duncan Anderson, and Kelsey Miller. Born in New Haven, the family moved to Hamden in late 1975. Tim graduated from Hamden High School in 1984 and served in the United States Air Force. After his discharge, he continued his studies enrolling in technical schools, learning several trades that eventually made Tim the jack-of-all-trades he was known and loved for. Tim always swung for the fences in all that he did, usually resulting in more projects than hours in the day. Tim was cognizant of the brevity of life and continually sought to maximize each day so he could be the husband, father, son, brother, and friend that everyone hoped to have. Tim was a long-time motorcycle enthusiast and, more recently, became an avid sailor, purchasing a sailboat in 2018. While words may be lost to those of us struggling to come to terms with this sudden and unexpected passing, the many, many, many memories will remain with us and those we share those memories with. Service will be at the Sisk Brothers Funeral Home, 3105 Whitney Avenue, Hamden, Connecticut 06518 on April 1, 2022. Calling hours are scheduled for 3-6 pm with a short memorial service from 6-7pm. In lieu of flowers memorial contributions may be made to the Clinton United Methodist Church Mission Fund, 12 Commerce St., Clinton, CT 06413. www.siskbrothers.com

Timothy W. Pope of Hamden, Connecticut passed away unexpectedly in his home on March 23, 2022. Born in New Haven, Connecticut on July 3, 1966. Tim was 55 years old, far too young. Timothy, shortened to Tim by friends and family, leaves a loving... View Obituary & Service Information

The family of Timothy W. Pope created this Life Tributes page to make it easy to share your memories.

Send flowers to the Pope family.