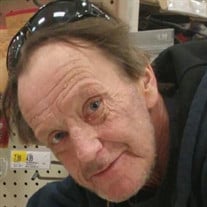 Thomas Keveney, 56, a lifelong resident of North Haven, died Monday, April 6, 2020, at home after a brave, six-year battle against cancer. Tom, born Oct. 27,1963, at St. Raphael’s Hospital in New Haven, was the son of the late Carolyn (Olive) Keveney and William J. Keveney. He is survived by his brothers, William Keveney III of Beverly Hills, Calif., and Peter Keveney of North Haven, his sister, Katherine Keveney of North Haven, and his nieces, Carolyn Keveney and Kristen Keveney. He will be dearly missed. Tom, who attended St. Rita School in Hamden and Notre Dame High School in West Haven, took pride in his long career in landscaping, including many years mowing lawns, planting gardens and, in the winter, driving a snow plow for Spring Glen Landscapers. He developed strong bonds with his clients, who liked his work and his personality. Tom also found great satisfaction working at Home Depot in East Haven, where his main goal was helping customers find just what they needed for home-improvement needs, especially when it came to the lawn-and - garden section, his area of expertise. He often worked a late shift there after his daytime landscaping duties, pitching in wherever necessary, learning about new products and never complaining about the long, two-job days. His colleagues appreciated his dedication and reliability. Tom’s love for the outdoors extended to his passion for fishing, whether on rivers, lakes or Long Island Sound. After a long day at work, he would often unwind with a quick fishing outing at the nearby Mill River. Tom was a voracious reader, devouring newspapers and wearing out his library card as he enjoyed the works of Tom Clancy, James Patterson, Sue Grafton and other authors. He liked cop shows and legal procedurals, too, especially “Law & Order.” He also was a big fan of the Boston Red Sox and the late, lamented Hartford Whalers. He was at Fenway Park for Game 4 of the 2004 American League Championship Series, witnessing Dave Roberts’ historic steal and Big Papi’s series-changing home run, and, on a bittersweet note, he saw the last goal the Whalers scored at the Hartford Civic Center. Tom also loved animals, especially dogs. As both a child and adult, he enjoyed the companionship of a pet beagle. Tom faced his illness with admirable determination, never giving up despite pain, setbacks and the somber realization four years ago that he would never be cancer-free. His great sense of humor helped him in difficult times and gave comfort to those who were concerned about him. Even while he was receiving chemotherapy, radiation and other treatments, he worked whenever he could. He appreciated the professional expertise and personal support of his lead oncologist, Dr. Anne Chiang, and her colleagues at Smilow Cancer Hospital at Yale New Haven. Tom’s courage in dealing with a life-threatening illness was an inspiration to his family and friends. In lieu of flowers, contributions in Tom's memory can be made to Smilow Cancer Hospital (Thoracic Oncology Program Fund), YNHH Development, P.O. Box 1849, New Haven, CT 06508 (online gifts: www.givetoynhh.org) or to the Friends of the New Haven Animal Shelter, P.O. Box 9056 Brewery St., New Haven, CT 06532. To leave a message of condolence please see www.siskbrothers.com. A Mass of Christian Burial will be celebrated Saturday, Oct. 31st at 10:30 am in Divine Mercy Parish, St. Rita Church, 1620 Whitney Ave., Hamden. Burial will follow in St Bernard Cemetery, New Haven. Calling hours at Sisk Brothers Funeral Home, 3105 Whitney Ave., Hamden will be Saturday morning, prior to the Mass from 8:30-10:00

The family of Thomas C. Keveney created this Life Tributes page to make it easy to share your memories.

Send flowers to the Keveney family.