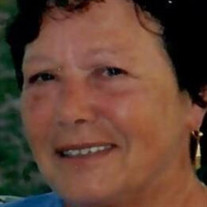 Not sure what to send?

Theresa Pedoto Ciardiello 93, a lifelong resident of Hamden passed away unexpectedly on Wednesday 0ctober 27, 2021 at Yale New Haven Hospital, St Raphael Campus. She continued to enjoy her family and friends throughout her lifetime even during the final days of life. She was loving wife of the late Michael Ciardiello for 46 years until his passing away in 1998. Through God our Father, her time called to continue love and Grace in heaven, which we, the departed will be United again with her. She was born on December 2, 1928 in S Martino Valle Caudina a province of Avellino, Italy, a daughter of the late John and Christina Pedoto. In 1949 she left her birthplace and made the journey to America on the SS Andrea Doria with her sisters. Despite the challenges she faced early on, she wasted no time in finding work at the Dorsey Company in New Haven, where she worked as a seamstress for well over 20 years, until the factory closed in the early seventies, Weeks later, she became employed by the Gant Shirt Company located on Sargent Drive (which some call Long Wharf Drive), which later became the New Haven Register Building, Unfortunately her employment at Gant Shirt would only last five years. This was due to company relocating to Puerto Rico to increase profit margins. When notified of the plant closing, she began her final job search by applying at Sargent Lock Co, that was located in the next building from Gant Shirt. She was hired in 1979 and continued for 30 years as a machine operator. She retired in 2009 at the age of 80 years old. Her life of hard work had ended in the following years she continued to enjoy her family and many friends who continued to enjoy her friendship and company. She had a large extended family, and many relationships that spanned her entire life. She was filled with love and generosity as a wife, mom, sister, aunt and grandmother and to all her friends she met along the way. She would never fail to share the many holidays, weddings, dinner parties, birthdays, etc that brought great pleasure to. her. She loved the outdoors, which began upon her arrival in 1949 spending weekends at the Lighthouse Park, and East Haven beaches with her family and friends, and also years later driving to Hammonasset State Park having large picnics with her children and her growing family that included her two sisters who married and had children. Her joy of planting flowers, and gardening around the yard picking fruits and vegetables at local farms which included baskets of ripe tomatoes which created a great sauce for those early Sunday dinners at 1:00 pm which became mandatory to attend, and the long walks that went on for miles with her sisters continued till age 80. Her strength was amazing, never weaking she was a tremendous mother who provided her sons with unconditional love and support to begin their future. Her genuine kindness will live on through all that were lucky enough to have known her, and the forever memories she left with us. We also, would like to thank all her doctors who provided medical knowledge and life care. Special thanks to Dr. Antonio Lopez for long term relationship formed regarding mom's latter years, and also Bob and the staff at Sisk Brothers Funeral Home in Hamden where a private service was held followed by a graveside service at All Saints Cemetery in North Haven, where she was laid to rest on 0ctober 29, 2021 alongside her husband. In lieu of flowers, donations to all that unfortunately could not attend can be made to local area Food Banks who are facing shortages to feed struggling family's during this Pandemic Crisis. She is survived by her two sisters, Mrs. Antoinette DeNisi of Hamden and Mrs. Rita Schiavone also from Hamden, her three sons, Jerry and his wife Catherine of 0ld Saybrook, Joseph and his wife Josephine of Ipswich, MA and Robert of Hamden, her three grandchildren, Hannah, Matthew and Marcus and her 6 great grandchildren, Roman, Olivia, Alexander, Linus, Emily and Jonathon.

Theresa Pedoto Ciardiello 93, a lifelong resident of Hamden passed away unexpectedly on Wednesday 0ctober 27, 2021 at Yale New Haven Hospital, St Raphael Campus. She continued to enjoy her family and friends throughout her lifetime even during... View Obituary & Service Information

The family of Theresa Ciardiello created this Life Tributes page to make it easy to share your memories.

Send flowers to the Ciardiello family.