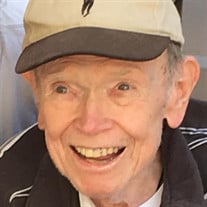 Dr. Stuart James McEnerney, PhD, 87, of Hamden, died peacefully Thursday, February 9, 2017. He was predeceased by both his wife, Mary Gertrude Foley McEnerney of 46 years, and his second wife, Margaret Shoulta of Bradenton, Florida. Stuart was born on May 26, 1929 to the late Stuart P. and Mary O’Connell McEnerney in Derby, CT. and is survived by his two sisters, Jeanne Davidson of Derby and Mary Jane (Wesley) Hohenshelt of Huntington, CT. Stuart is the father of eight children, Kathy (Stephen) Avery of Carmel Indiana; Eileen O’Neill, Lynn (Donald) Pfeiffer, and Jean (Alan) Stevens all of Hamden; James McEnerney of Stonington; Edward McEnerney of Hamden; Christopher (Jeannie) McEnerney of Milford; and Stuart (Nicole) McEnerney of Meriden. Stuart graduated from Derby High School in 1947. He received his Bachelor’s degree in Education from New Haven State Teachers College; both his Master’s degree, in Audio/ Visual Education, and his Doctorate degree were earned at the University of Connecticut; with an MBA from the University of New Haven. Stuart was the Department Chair of Math and Science for Gateway Community College where he taught Mathematics for 30 years and was an adjunct Math professor at the University of New Haven and Southern CT State University as well as an adjunct Math professor at Valencia Community College in Orlando, Florida. Stuart and his wife Mary owned and operated Mac’s Auto Driving School in Shelton, CT where Stuart was a former driving instructor and Math teacher at Shelton High School. Stuart was active in politics and was the former Democratic Chairman in North Branford, CT from 1957-1964. During his tenure as Chairman, his energy and organizational abilities were rewarded with the First Victory for the Democratic party in 139 years of a continuous Republican Administration; the first victory for the democratic party in the history of North Branford. He served as Chairman of the School Study Committee, the Chairman of the School Building Committee and the Chairman of the Zoning Board of Appeals in North Branford He was active in Hamden, serving as a member of the Democratic Town Committee, a member of the Charter Commission, a member of the Hamden Library Building Committee and a member of the Hamden Library Board. Stuart was an active parishioner of St. Rita’s Church since 1964. Stuart was the proud grandfather of Patrick and Connor Avery; Briana O’Neill; Donald and Kelly Pfeiffer; Oliver, Charles and Reilly Stevens; Noel, Finian and Kian McEnerney; and Shannon, Jamie and Quinn McEnerney. Stuart, formerly of Derby, New Haven, North Branford and Winter Garden, FL, had resided in Longboat Key and Ponte Vedra, FL prior to returning to Hamden, CT. Stuart leaves behind his stepchildren, Kathaleen and Ken Kuiper and step grandchildren Ryan, Mark and Avery Kuiper all of Florida. Stuart also leaves behind several nieces and nephews. Funeral from Sisk Brothers Funeral Home, 3105 Whitney Ave., Hamden, Friday morning at 9:30. Mass of Christian Burial in St. Rita Church at 10:00. Burial will follow in St. Agnes Cemetery, Branford. Calling hours at the funeral home will be Thursday from 4 – 8 pm. In lieu of flowers, memorial contributions may be made, to support the broadcasting of daily Televised Mass, to The Office of Radio and Television (ORTV) 15 Peach Orchard Rd Prospect, CT 06712. To leave an online condolence please visit www.siskbrothers.com

The family of Dr. Stuart James McEnerney created this Life Tributes page to make it easy to share your memories.

Send flowers to the McEnerney family.