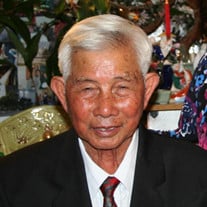 Shu Cheung Chow, passed away peacefully surrounded by his family on May 9th, 2021, at the age of 99. He was born on May 18, 1921 in Zhongshan, China to loving parents and an older brother. Although his father was a well-respected doctor, the family, along with most of China, faced constant turmoil as the Chinese government changed from imperial dynasty to a new republic. In 1958, Shu Cheung with his wife and children left for Hong Kong. Initially, they settled in the outskirts where they farmed. In later years, Shu Cheung worked in the city as a security guard. He immigrated to the United States in 1979 where he lived in Brooklyn, NY and worked as a chef cooking delicious Chinese food for the community. Shu Cheung became a naturalized citizen in 1997 and was a proud American who displayed his naturalization certificate in a frame above his bed. Hardworking and generous, he was able to live the American dream by purchasing his own home and providing for his seven children. Active in his civic commitment, Shu Cheung never missed voting in an election and had numerous photos taken with elected officials. In his retirement, Shu Cheung enjoyed dim sum brunches, regular visits with his family, and taking nearly daily trips to his local community center for lunches with his friends from the neighborhood. He will be dearly missed at Chinese New Year, when his 30 or so children, grandchildren, and great-grandchildren would gather, and he would bestow on them lucky envelopes and red bags full of treats. Shu Cheung was so important to his family that when his car broke down on the way to his granddaughter's wedding in New Haven, CT from Brooklyn, NY, the wedding was delayed until he, known affectionately as “Gong Gong” or "Ye Ye" to his grandchildren, arrived to celebrate. No moment in Shu Cheung’s family’s life was complete without “Ah Ba/Father; Gong Gong/Ye Ye/Grandfather” present. Shu Cheung was predeceased by his wife, Ho Chow in 2006 and leaves behind his seven children: Jane Mak and her husband David; Ming Ngai; Pak Chow and his wife Lin; Karen Lee and her husband Edward; Raymond Chau and his wife Hong; Mei Wong and her husband K.C.; and Wing Chow and his wife Melissa. Shu Cheung is also survived by his 15 grandchildren: Anthony; Allen and his wife Riona; Jack and his wife Anna; Amy and her husband, Michael; Thomas and his wife Aileen; Anita; Betty; Brian and his wife Faith; Jeffrey; Katherine; Jasmine; Alison; Yemen; Valerie; Brandon; and 5 great-grandchildren: Gloria, Clarissa, Mikey, Alyssa and Zoe. It was Shu Cheung's wish to celebrate his 100th birthday and while he was only days away from this feat, he took his last breath while being serenaded “Happy Birthday” by his family. A private service will be held for Shu Cheung, who will be buried at St. Mary's Cemetery in Hamden, CT. www.siskbrothers.com

Shu Cheung Chow, passed away peacefully surrounded by his family on May 9th, 2021, at the age of 99. He was born on May 18, 1921 in Zhongshan, China to loving parents and an older brother. Although his father was a well-respected doctor, the... View Obituary & Service Information

The family of Shu Cheung Chow created this Life Tributes page to make it easy to share your memories.

Shu Cheung Chow, passed away peacefully surrounded by his family...

Send flowers to the Chow family.