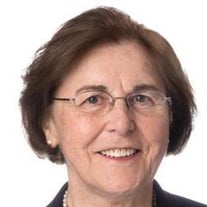 Ruth McCorkle, PhD, RN, FAPOS, FAAN, an international leader in healthcare and a pioneer in oncology nursing, symptom science, hospice and palliative care, died peacefully at her home in Connecticut on August 17, 2019 surrounded by her loving family. Born Margaret “Ruth” McCorkle in Johnson City, TN on March 4, 1940, her parents, John Joseph McCorkle and Virginia Upchurch McCorkle, inspired her voracious work ethic. Her life’s vocation was preceded by experiences with the US Air Force Nurse Corps helping mortally wounded soldiers transition from battlefields in Vietnam to their untimely deaths. Her experience serving our country influenced her vision of the nurse’s role in assisting vulnerable individuals cope with life’s most difficult circumstances, as well as bringing death out from the shadows and ultimately to academia, research endeavors, and clinical practice. This led to her to study at St. Christopher's Hospice in London and later to cofound the Hospice of Seattle and the Northwest Regional Oncology Society, culminating in the development of the Symptom Distress Scale and the Enforced Social Dependency Scale, both groundbreaking measures in psychosocial oncology. As Principal Investigator on seven clinical trials, McCorkle furthered the role of Advance Practice Nurses on quality of life and survival among chronically ill patients. As Florence Schorske Wald Professor Emerita of Nursing and Professor Emerita of Medicine and Public Health at Yale University, McCorkle continued her work as Director of Psychosocial Oncology at the Yale Comprehensive Cancer Center until her retirement in the Spring of 2019. McCorkle's professional career also included stints as Professor of Nursing at the University of Washington, Professor of Nursing at the University of Pennsylvania, and Associate Director of Cancer Control at the University of Pennsylvania Cancer Comprehensive Center. A prolific writer, McCorkle’s works appear in many professional nursing and medical journals in the US and abroad. Among her innumerable accolades, she was the first non-medical research recipient of a National Cancer Institute Research Training Grant, was elected to the Institute of Medicine in 1990, and was named Nurse Scientist of the Year by the Council of Nurse Researchers in 1993. In 2017 she received the Lifetime Achievement Award from the Yale Cancer Center, and in 2018 received the American Academy of Nursing’s highest honor as a “Living Legend”. McCorkle’s career was second only to her love for family and friends. She will be lovingly remembered by her six children, granddaughter, sister, three nieces, and countless protégés. Calling Hours will be from 4:00 - 7:00 pm at Sisk Brothers Funeral Home, 3105 Whitney Ave., Hamden on Tuesday, Aug. 20th. In lieu of flowers, memorial contributions may be made to the Smilow Cancer Center at Yale New Haven Hospital, 35 Park St.., New Haven, CT 06511

Ruth McCorkle, PhD, RN, FAPOS, FAAN, an international leader in healthcare and a pioneer in oncology nursing, symptom science, hospice and palliative care, died peacefully at her home in Connecticut on August 17, 2019 surrounded by her loving... View Obituary & Service Information

The family of Ruth McCorkle created this Life Tributes page to make it easy to share your memories.

Send flowers to the McCorkle family.