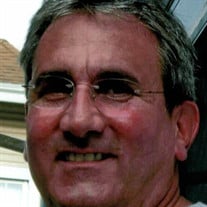 Robert J. Solimene, a longtime Amtrak electrician and devoted husband, died April 12 at Connecticut Hospice in Branford of Creutzfeldt-Jakob Disease. He was 63. Bob was born in New Haven on Oct. 25, 1953, to the late John and Carmella P. (Cassella) Solimene. He was the third of six children. The family lived in West Haven, where Bob graduated from West Haven High School. His father owned Kelsey Electric and mentored him. At Amtrak, Bob was in turn a mentor to many, revered by his coworkers as a highly knowledgeable and skilled railway electrical technician. He served as vice president of Local IBEW 747 as well as union committeeman and local chairman. He retired in December after 41 years. He met his wife of 36 years, the former Roberta LaFrance, through a mutual friend. Roberta recalls that the three were driving to the Beardsley Zoo, and on the way, she sat in the back seat. On the return trip, “I got in the front seat,” she said, “and never looked back.” The couple loved traveling, from Puerto Rico to Italy to New Mexico. Wherever they went, they would rent a car and “just go whatever way we turned,” Roberta recalled. “That was the most fun.” At the couple’s Bethany home, Bob enjoyed landscaping and home improvement projects. He was a voracious reader of “Consumer Reports” and enjoyed helping friends and family research their purchases of cars and other items. “He was everybody’s husband,” Roberta said jokingly. “He was the guy who would do what everybody needed to be done.” Bob planned to celebrate his retirement with Roberta in St. John this spring. After a sudden and rapidly developing illness, he died peacefully with his wife and brother at his side. In addition to Roberta, Bob is survived by brother Richard (Dina) Solimene of West Haven; sisters Joanne (Roger) Brouillard of Wallingford, Diana (Jim) Garlick of Wallingford, Carol Solimene of Tiverton, RI, and Laurie Solimene of Meriden, mother-in-law Alberta LaFrance of Wallingford, brother in law Daniel (Sigrid) LaFrance of FL, many nieces and nephews; and two beloved cats, Sophia and Benny. Calling hours will be 5 to 8 p.m. Thursday, April 20 at Sisk Brothers Funeral Home, 3105 Whitney Ave. in Hamden. A Memorial Mass will be held at 10 a.m. Friday, April 21 at Our Lady of Mt. Carmel Church, 2819 Whitney Ave. in Hamden. Burial will be private. In lieu of flowers, contributions may be directed to the CJD Foundation, P.O. Box 5312, Akron, OH, 44334.www.siskbrothers.com

Robert J. Solimene, a longtime Amtrak electrician and devoted husband, died April 12 at Connecticut Hospice in Branford of Creutzfeldt-Jakob Disease. He was 63. Bob was born in New Haven on Oct. 25, 1953, to the late John and Carmella P. (Cassella)... View Obituary & Service Information

The family of Robert J. Solimene created this Life Tributes page to make it easy to share your memories.

Send flowers to the Solimene family.