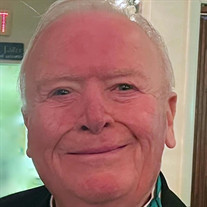 Robert C Shanley, 78 of Orange, passed away suddenly on Friday, September 17th. He is survived by his loving wife of 52 years Donna L. Shanley, and his adoring children, son PJ Shanley (Whitney), and daughter Erin (Nuala). Bob is also survived by his four adoring grandchildren, Caitlyn, Colleen, Ronan, and Maeve, as well as many loving brothers and sisters in laws, nieces and nephews. Also, survived by brother James (Betty Elizabeth) – predeceased by brother Richard (Beverly). Born May, 31st 1943, Bob was the son of Dorothy and Patrick J Shanley. He graduated Hamden High and Quinnipiac College with a degree in Business Administration. He was discharged from active duty in the army in 1966 He had a long and successful career in insurance, beginning with the Travelers insurance company and then the Hanover Insurance company. After 10 years for working with both companies, Bob embarked on an independent career and is now affiliated with Nicholson Associates of Milford. Bob joined the Professional Insurance Association (PIA), serving as president from 1995 from 1996 and six years as their national director. Bob was active in the Orange community, having coached both PJ and Erin. Bob was also an active member of the Orange Democratic Town Committee and served as a town constable. He was also proudly chairman of the Orange Police Commissioners for 10 years. Bob is proud to be involved in the Irish community, serving as President of the New Haven chapter of the Irish Immigration reform movement, as well as their National Director. Bob was a communicant and volunteer at Holy Infant Church for over 30 years. Bob is a member of the AOH, the West Haven Irish American Club, as well as the Knights of Saint Patrick, serving as President in 1982. The Knights awarded him the Knight of the Year Award in 1999. Bob was a proud member of the New Haven St. Patrick’s Day Parade committee since the 1970s, serving as Grand Marshall in 1987. He was also the Executive Director for 10 years. A Mass of Christian Burial will be Celebrated Thursday at 11 a.m. in Holy Infant Church, Orange. Friends are asked to go directly to church. Burial in Orange Center Cemetery. Calling hours are Wednesday from 4 - 8 p.m. in Sisk Brothers Funeral Home 3105 Whitney Ave. Hamden. Masks will be required in the funeral home and church. In lieu of flowers contributions to the Knights of St. Patrick, P.O. Box 185127 Hamden, CT. 06518 or to the Associated Irish Societies, P.O. Box 9078 New Haven, CT. 06532. To leave an online condolence please visit www.siskbrothers.com

The family of Robert C. Shanley created this Life Tributes page to make it easy to share your memories.

Robert C Shanley, 78 of Orange, passed away suddenly on Friday,...

Send flowers to the Shanley family.