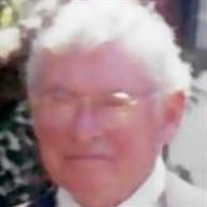 Robert Laurence (Bob) Nolan of Hamden Connecticut died peacefully on December 31, 2021 at the age of 97. He was the husband of 61 years to the late Anne (Nan) McAviney Nolan. Bob was born in New Haven, CT on December 10, 1924, a son of the late William J. and Abigail Carroll Nolan. He attended local schools and graduated from Hamden High School. He served in World War II with the US Army in North Africa as a Sergeant. After service, he attended and graduated from The College of the Holy Cross. Following college, he attended the School of Law at the University of Connecticut. During his working life, he was in the insurance agency business, a licensed real estate broker and was involved in property management. He was also associated with Long Wharf Maritime Center. Bob served the Town of North Haven in many capacities including Treasurer of the Democratic Town Committee, an elected Board of Finance member and Chairman of the March of Dimes. He was a member of the New Haven Gaelic Irish Community Center, a former member of the Knights of St. Patrick and member of the Knights of Columbus. Mr. Nolan was a parishioner of St. Rita Church and served as a charter member of the Parish Council. Bob, Nan and family enjoyed many years as summer residents in Madison CT. He was a loving, spiritual and gentle man with a beautiful smile and a kind word for everyone. He is survived by his three daughters: Clare Nolan McNeely and her husband Richard of Hamden, Anne Nolan Germain of Hawthorne, NJ and Joan Moria Nolan of New Haven. He was predeceased by an infant son Thomas Carroll Nolan and a brother William J. Nolan, Jr. of North Haven. He also leaves 6 grandchildren and 4 great grandchildren. Friends may call on Wednesday January 12, 2022 from 9:30am – 10:30am at Sisk Brothers Funeral Home, 3105 Whitney Ave., Hamden. His funeral procession will leave the funeral home at 10:30am for a Mass of Christian Burial at 11:00am in St. Rita Church, 1620 Whitney Ave. Hamden. His burial with military honors will follow at St. Lawrence Cemetery in West Haven. In lieu of flowers, memorial contributions may be made to: St. Rita School, 1601 Whitney Ave. Hamden, CT or to the College of The Holy Cross, Worcester, MA 01610.

Robert Laurence (Bob) Nolan of Hamden Connecticut died peacefully on December 31, 2021 at the age of 97. He was the husband of 61 years to the late Anne (Nan) McAviney Nolan. Bob was born in New Haven, CT on December 10, 1924, a son of the... View Obituary & Service Information

The family of Robert L. Nolan created this Life Tributes page to make it easy to share your memories.

Send flowers to the Nolan family.