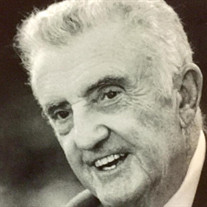 Robert John Marlowe, long time resident of Woodbridge, more recently of Hamden, and local realtor of 50 years died February 15, 2018 after a long illness. Born in New Haven on March 9, 1929, he was the son of Cecil and Katherine Daley Marlowe. He will be lovingly remembered by his wife of forty eight years, Margaret Goekler Marlowe, and their children Katherine Dodds( William) of Cresskill New Jersey, Deborah Criscuolo (Robert) of Woodbridge, Connecticut, Christine Wesner (William) of Wilmington, North Carolina, and sons Robert Marlowe of Los Angeles, California, and Gregory Marlowe (Joanna), of Woodbridge, Connecticut. He will be fondly remembered by his ten grandchildren: Courtney, Claire and William Dodds, Emily, Edward, and John Criscuolo, Caleb, Lilly, and Owen Wesner, and Jack Marlowe. He was pre-deceased by his parents and brothers Atty. Frank J. Marlowe, of Guilford, CT and Paul B. Marlowe of Marco Island, Florida. Robert graduated from Fairfield Prep in 1947 and Fordham University in 1951. Upon graduation, he received his commission in the Unites States Air Force and was assigned on active duty to West Hampton Beach, Long Island and subsequently to Goose Bay, Labrador. He remained in the reserves following discharge, attaining the rank of Captain. Upon leaving the service he joined his brother Paul and became a partner in the Woodbridge Agency Real Estate and Insurance. He was active in Real Estate and Insurance in the Woodbridge, Bethany, Orange area for 50 years, and co-owner and developer of Meadow View and Round Hill Estates in Woodbridge. He was a member of the Greater New Haven Association of Realtors, serving on the Board of Directors and the Ethics and Arbitration committees. He was a member of the Professional Insurance Association, the Connecticut and the National Associations of Realtors. At the time of retirement, he found a new interest in staffing the New Haven Tourist and Information Center. He was a regular communicant of Our Lady of the Assumption Parish in Woodbridge, where he had worked diligently to help establish the Assumption Church on Center Road. He was co-founder of the original men’s club, served as lector for 17 years, and chaired and served on a variety of committees and programs through the years. Bob held the belief, that “our children and grandchildren are our greatest treasures and greatest pleasures”. Proof of which found him always involved in their interests and activities, such as Father’s Little League Baseball Coach, Assistant Scout Master, Youth Football League member, officer of Notre Dame High School Parent’s Association. He was ever present at their basketball games, track meets, ski competitions, and numerous other projects and activities in which they were involved, and was always their biggest fan. He will be remembered by all for his kindness and gentle humor. The family wishes to express their gratitude to a fine man and close friend, Sam, Bob’s faithful and devoted caregiver of the last five years. His compassion, dedication, and respect were gifts Bob and his family were fortunate to receive. A Mass of Christian Burial will be Celebrated Tuesday at 10 a.m. in Church of the Assumption 80 Center Rd. Woodbridge. Friends are asked to go directly to church. Burial will follow in St. Lawrence Cemetery. Calling hours are Monday from 4 - 8 p.m. in Sisk Brothers Funeral Home 3105 Whitney Ave. Hamden. Donations in Bob’s name may be made to the Church of the Assumption 80 Center Road, Woodbridge CT 06525 or to the Missionary Sisters of the Immaculate Conception, Our Lady of Sorrows Convent, 1st floor, 9 Pocono Road, Denville, NJ 07834. ,

Robert John Marlowe, long time resident of Woodbridge, more recently of Hamden, and local realtor of 50 years died February 15, 2018 after a long illness. Born in New Haven on March 9, 1929, he was the son of Cecil and Katherine Daley Marlowe.... View Obituary & Service Information

The family of Robert John Marlowe created this Life Tributes page to make it easy to share your memories.

Send flowers to the Marlowe family.