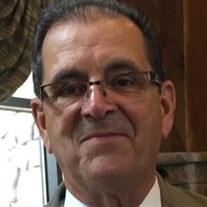 It is with great sadness that the family of Robert B. MacDonald announces his passing from a sudden illness, on Monday, February 19, 2018, at the age of 72 years. Devoted husband, loving father, adoring grandfather, classic car enthusiast, business owner, part-time comedian, and full time brother, uncle, and friend. Bob was born in Langston, Virginia on August 13, 1945, but spent the majority of his life in Hamden, CT, until recently moving to Cheshire, CT. He was a graduate of Assumption Prep High School and Fairfield University. Bob became an insurance adjuster and started his own firm, RBM Companies, Inc., and later became the owner of The MacDonald Companies, Inc. He was well respected in the insurance industry, winning several awards over his many years in the business. Bob was also very active in his community and served on the board of several organizations. Bob enjoyed spending summers at the cottage, attending car shows, watching his grandchildren participate in plays and sports, and getting together for laughs with family and friends. He touched so many lives in his 72 years, and was always there to lend a helping hand, provide a laugh, or give one of his big bear hugs. Bob will be dearly missed by his devoted wife and best friend of 49 years, Joanne (McDonough) MacDonald and his children, Matthew (Jessica) MacDonald and Kristin (Bryan) Ward. “Biyabee” also leaves behind seven grandchildren whom he absolutely adored; Hannah, Brennan, Declan, Finn, and Kieran Ward and Payton and Oliver MacDonald. He was also deeply loved by his brothers and sisters, J. Neale (Jeanne) MacDonald III, Caryl (Michael) Reilly, Susan Gendron, Kevin (Marilyn) MacDonald, William MacDonald, Nancy (Richard) Leddy, Kathleen (Marshall) Richards, and Debra (Brian) O’Leary, along with over 50 devoted relatives and friends. Bob is now reunited with his parents, J. Neale and Louise MacDonald. A Mass of Christian Burial will be Celebrated Wednesday February 28, 2018 at 10 a.m. in Our Lady of Mt. Carmel Church. Friends are asked to go directly to church. Burial in Centerville Cemetery. Calling hours are Tuesday from 4 - 8 p.m. in Sisk Brothers Funeral Home 3105 Whitney Ave. Hamden. In lieu of flowers contributions to the Alzheimer's Association 200 Executive Blvd. Southington, CT. 06489-1058. To leave an online condolence please visit www.siskbrothers.com

It is with great sadness that the family of Robert B. MacDonald announces his passing from a sudden illness, on Monday, February 19, 2018, at the age of 72 years. Devoted husband, loving father, adoring grandfather, classic car enthusiast,... View Obituary & Service Information

The family of Robert B. MacDonald created this Life Tributes page to make it easy to share your memories.

It is with great sadness that the family of Robert B. MacDonald...

Send flowers to the MacDonald family.