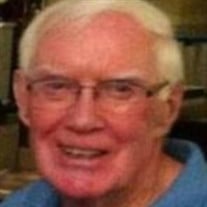 Robert T. Gilhuly Sr., (Battalion Chief, NHFD-Ret.) 94 of Hamden passed away peacefully on May 9,2022 at the Grimes Center in New Haven. He was the husband of the late Gail Leonard Gilhuly. He is survived by his children, Robert T. (Maggie) Gilhuly Jr., (Capt., NHFD-Ret.) of Madison, Lynn (Joseph) Borelli of Hamden and Michael (Roz) Gilhuly of Wallingford, grandchildren Christopher (Megan) Borelli, Marc (Michelle) Borelli, Joseph (Michelle) Borelli, Matthew Borelli, Ryan (Kerry) Gilhuly, Kaitlyn (Ryan) Wall, Mary (Sean) Connelly, Emma Gilhuly, Kevin Gilhuly and Shane Gilhuly, great grandchildren Shia, Brayden, Max, Caeson, Erin, Isla, Madelyn and Quinn, a sister Marion F. Gilhuly of Guilford and many nieces and nephews. He was predeceased by a sister Eleanor Connors and brothers John, Frank, Edward, James and David Gilhuly. He was born Dec. 21,1927 in New Haven a son of the late Frank and Mary Carey Gilhuly, was a graduate of the former Commercial High School and served in the US Army stationed in Korea. Bob always had a smile and a kind word for everyone he encountered – and he usually left them smiling. During his 33+ year career with the New Haven Fire Department, he rose to the rank of Battalion Chief, where he was a respected leader and held in high regard by his fellow fire fighters. Bob also served as President of Local 825 in the 1960s and was instrumental in negotiating the 42-hour work week, which was nationally recognized and remains in place today. He also organized “Old Timer’s Night” to recognize all NHFD retirees for their service, regardless of their rank or popularity in the department. After retiring in 1986, Bob continued to work at Sears in Orange, CT until he retired as a Director in Human Resources. Bob loved his family dearly and was always there to provide guidance and support. He was an avid reader and an accomplished crossword puzzler. He loved baseball and the St. Louis Cardinals and was a lifelong New York Giants fan. Bob touched many lives in his 94+ years and most who met him would agree they were better for it. He will be remembered by many and will be greatly missed by all who loved him. Funeral service will be held Saturday morning at 10:30 in Sisk Brothers Funeral Home, 3105 Whitney Ave., Hamden. Entombment with military honors will follow in St. Lawrence Cemetery Mausoleum. Calling hours will be Saturday morning prior to the service from 8:30-10:30.The family would like to thank everyone at the Grimes Center for the wonderful care Bob received and the sincere compassion we felt from all during this very difficult time. www.siskbrothers.com

Robert T. Gilhuly Sr., (Battalion Chief, NHFD-Ret.) 94 of Hamden passed away peacefully on May 9,2022 at the Grimes Center in New Haven. He was the husband of the late Gail Leonard Gilhuly. He is survived by his children, Robert T. (Maggie)... View Obituary & Service Information

The family of Robert T. Gilhuly Sr created this Life Tributes page to make it easy to share your memories.

Send flowers to the Gilhuly family.