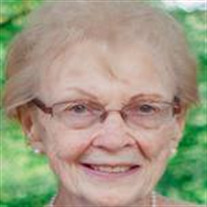 We mourn the passing of Rita, mother, grandmother, and great grandmother on January 15th, 2022, at the age of 98 from complications of Covid-19. She was born Rita Frances Callahan in New Haven to Julia Gorman Callahan and John “Jack” Callahan of Lilac Street on July 23rd, 1923. She went to Bassett Street School and Hillhouse High School. In the midst of WWII, she attended the Hospital of St. Raphael School of Nursing graduating in the class of 1944. She then joined the Army Nurse Corp as a second lieutenant and was assigned initially to Fort Devens, Massachusetts treating home-coming soldiers. She was slated for transfer to Burma when the war ended. She married another home-coming GI, Walter F. Hutchinson, of Hamden in June of 1946, while continuing her nursing career as a visiting nurse in New Haven. In 1948 the first of her three children, Gordon, was born, followed by Brian in 1950 and Dawn as the youngest, in 1954. She took time off from nursing until her youngest was in high school when she returned to medical floor nursing at Hospital of St. Raphael – ultimately, she stayed at unit 4E specializing in peritoneal dialysis patients. She was an active member of the Hospital of St. Raphael School of Nursing Alumni Association. She and Walter lived in Hamden where her children all attended public schools. After her retirement from nursing, they both enjoyed and cherished being active grandparents helping with their eight grandchildren. The death of her husband, Walter, in 2007 of pancreatic cancer and the subsequent death of her youngest, Dawn, in 2018, had a profound impact on her, though she continued to live independently. She moved initially to Cheshire living there for many years, then to an assisted living arrangement in East Haven following a hip fracture early in 2021. She was hospitalized with a recent fall and the diagnosis of active Covid-19 infection. She died peacefully from respiratory complications of Covid on Saturday, January 15th at age 98. She will be sorely missed by her entire family. Her kind, gentle and loving character will remain with us forever. She is survived by her son, Dr. Gordon Hutchinson, his wife Margrit and their two children, daughter Maya of Avon, Colorado, and Drs. Christoph and wife, Morgan of Philadelphia: son Brian and his wife Carmen of Beacon Falls, Connecticut and their children Yvonne, and Tina and granddaughter, Olivia of Tennessee. She also leaves her son-in-law, Leonard, of Avon, Connecticut, husband of her beloved daughter, Dawn who pre-deceased Rita in 2018. They have four children: grandson Kevin of West Hartford, grandson Matthew of Avon, granddaughter Molly of Boston and granddaughter Kelly and son-in-law Sebastian Burzacchi with great granddaughter, Shea of Arizona. There will be no viewing time. Mass of Christian burial will be at St. Mary’s Church, Hillhouse Avenue in New Haven at 10 AM, Saturday, January 22nd. Burial will be in St. Mary’s Cemetery 3110 Whitney Ave., Hamden, CT. Any florist arrangements order can be sent directly to Sisk Brothers Funeral Home, 3105 Whitney Ave. Hamden which is in charge of the arrangements. wwwsiskbrothers.com

We mourn the passing of Rita, mother, grandmother, and great grandmother on January 15th, 2022, at the age of 98 from complications of Covid-19. She was born Rita Frances Callahan in New Haven to Julia Gorman Callahan and John &#8220;Jack&#8221;... View Obituary & Service Information

The family of Rita C. Hutchinson created this Life Tributes page to make it easy to share your memories.

We mourn the passing of Rita, mother, grandmother, and great...

Send flowers to the Hutchinson family.