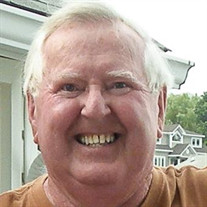 Richard Lawrence McGrath of Hamden and Branford Ct and Naples FL died peacefully on October 9th with his family by his side.  Dick McGrath was born in Dracut, MA on 8/4/1933. He was a funny, loving man with a thick Boston accent (despite sixty plus years of living in CT) that made all of his many jokes much funnier than they should have been. A graduate of Umass Lowell with a Masters Degree from Boston University, Dick spent his professional life in the publishing industry. Long before Amazon, Kindles and Barnes and Noble, Dick McGrath called all of New England and its many book stores his territory as a traveling book salesman. He represented such great publishers  as Viking, Penguin, Prentice Hall and Random House and helped authors like Stephen King, Robert Parker and Kurt Vonnegut travel from Bar Harbor to New Haven and make their way onto the shelves of independent owners who became his close friends.  A proud navy veteran who spent time on the USS Forrestal, Dick was married to the love of his life Ann O'Neill McGrath for 56 years. Dick spent every summer with Ann at their family cottage in his beloved Lanphiers Cove with a legion of special friends who matched  his love for a laugh, a cocktail, and a good time. He was a lucky man.  Dick leaves behind his beloved wife Ann, his beloved daughter Megan, and son Brian and daughter-in-law Monica. He was predeceased by his son Rick. As Pop Pop he devoted his life and all of his love to his six grandchildren, Rick, John, Peter, Tommy, Billy and Lydia. One of seven children, Dick is survived by his sisters Kathy Garvey and Maureen Ferrar and was predeceased by his sister Liz and brothers Mac Jack and Bob. Always close to Ann's family he is survived by her sisters Peggy ( and Bob ) Batick, Mary ( and Jim ) Raccio, and Kathy ( and Bob ) Kilijanski and predeceased by her brother and his wife Vincent and Pam O'Neill.  A private memorial service will be held for his family and friends. Sisk Brothers Funeral Home 3105 Whitney Ave. Hamden in care of arrangements. To leave an online condolence please visit www.siskbrothers.com

Richard Lawrence McGrath of Hamden and Branford Ct and Naples FL died peacefully on October 9th with his family by his side.  Dick McGrath was born in Dracut, MA on 8/4/1933. He was a funny, loving man with a thick Boston accent (despite sixty... View Obituary & Service Information

The family of Richard L. McGrath created this Life Tributes page to make it easy to share your memories.

Richard Lawrence McGrath of Hamden and Branford Ct and Naples...

Send flowers to the McGrath family.