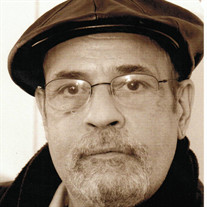 Richard Paul Guzzio died peacefully at Connecticut Hospice on Sunday January 31, 2016 after a long illness. He was the fourth child of Helen Cain Guzzio and Salvatore Joseph Guzzio born September 6, 1945 in New Haven. He graduated from North Haven High School in 1964 where he was senior class president. Richard was a terrific dancer, often the favorite of classmates who asked him to join them on WTNH Channel 8 Bandstand. After high school Richard graduated from St. Raphael's School of Radiology. He was an x-ray technician at St. Raphael Hospital, Park City Hospital in Bridgeport and the VA Hospitals in both Providence, RI and West Haven, CT. During the 1970's Richie was one of the original organizers of Catholic Dignity in New Haven. During those years, his home was a welcoming place for many, often serving up his famous baked beans that were made from scratch. When entertaining out of town guests, he loved to show off the City of New Haven. He loved the city and its history. Richard has a strong sense of faith. He was a parishioner of St. Aedan's Church. Richard leaves behind brothers James of Charlotte, NC, Robert of Madison, CT. and Michael Guzzio of Caudwell, NJ sisters Eleanor Guzzio of Wilmette, IL and Lorraine Chammah of Austin, TX. He was the favorite uncle to many nieces and nephews. He was also a proud godfather to Ivailo Agli who he helped raise. The family would like to thank Dr. Sam Geller and Dr. Arthur Selzer for their years of care and to also thank the staff at Connecticut Hospice who helped Richie in his last days. A Mass of Christian Burial will be Celebrated Friday at 10 a.m. in St. Aedan Church. Friends are asked to go directly to church. Burial in St. Bernard Cemetery. Calling hours will be Thursday from 5 - 8 p.m. in Sisk Brothers Funeral Home 3105 Whitney Ave. Hamden. Memorial donations may be made to Smile Train P.O. Box 96231, Washington, D.C. 20090-6231, CT. Hospice 100 Double Beach Rd. Branford, CT. 06405 or to a charity of one's choice. To leave an online condolence please visit www.siskbrothers.com

The family of Richard Paul Guzzio created this Life Tributes page to make it easy to share your memories.

Send flowers to the Guzzio family.