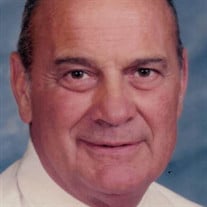 With family at his side, Richard A. (Dick) Gagliardi passed away peacefully in Branford on July 2, 2018 at the age of 84. Dick lived a fulfilling life that was enriched by family devotion, service to country, and more than a half-century of academic and athletic achievement. Born on September 20, 1933, Dick was the son of Joseph and Josephine Gagliardi. From 1948 to 1952, he attended Hamden High School, where he starred in varsity football, hockey, and track. In his senior year, Hamden’s hockey team won the New England High School Championship and Dick was named All-New England Defenseman. Dick attended Boston College on a full four-year scholarship, and he graduated in 1956 after lettering in hockey and football. In 1954 and again in 1956, he played on the Eagles’ ECAC championship hockey teams that advanced to the NCAA finals. From 1956 to 1958, Dick served honorably in the United States Marines Corps. Stationed in Hawaii, he captained the Quantico Marine football team and the Hawaii Marine football team. Most important, during his tour of duty he met Manon, the love of his life. In 1960, Dick was named head coach of Yale University’s freshman hockey team. Five years later, he was elevated to head coach of Yale’s varsity hockey team. After leaving collegiate coaching, he was appointed Yale’s associate business manager of athletics. Sports and coaching young athletes remained year-around passions. Dick became the director of SVS Hockey School, which conducted summer sessions until 1992 at Taft School, Berkshire School, St. George’s School, Portsmouth Abbey School, and Brown University. Several thousand youth leaguers from across the nation traveled to these New England locations for expert instruction from many of the nation’s leading collegiate, high school, and prep school coaches. During these years, Dick also founded and managed the SVS Pro Shop, the Hamden center that outfitted legions of youth league, high school, and adult athletes. Dick taught mathematics at Hamden High School for 37 years. When he retired from the faculty in 1993, he became Athletic Director and a teacher at Sacred Heart Academy for another 12 years. From 1987 to 2001, Dick was also Hamden High’s varsity hockey coach, rejoining his team from four decades earlier. In 1988-1989, he led the Green Dragons to the Connecticut State Championship. In recent years, Dick and Manon split their time between Siesta Key (Sarasota) Florida and Branford, Connecticut. In Sarasota, he loved the YMCA handball community and made many new friends. By the time Dick took his curtain call after a long career, he had “retired” three times – from Hamden High’s classroom in 1993, from the helm of Hamden High’s varsity hockey team in 2001, and from Sacred Heart’s Athletic Directorship and faculty. At the Sacred Heart dinner honoring his “third retirement,” Dick shared his lifelong values with the high school players and their families. “Success in sports is not measured by the scoreboard, the trophies on your shelf, or the news clippings in your scrapbook. Success means loving to play as much at 60 as you do at 16. This love will last when you respect yourself, your teammates, and your opponents.” Dick was blessed with a large family. He is survived by his wife of 60 years, Manon B. Gagliardi; by his two sons, Dr. Joseph A. Gagliardi and Richard A. Gagliardi Jr.; and by Richard’s wife, Elaine Hightower Gagliardi. He is survived by a sister Anita Gagliardi DellaCamera and also by four precious grandchildren: Richard A. Gagliardi III, Alexia Gagliardi, Matthew Gagliardi, and Gina Gagliardi, and by many nieces, nephews, and cousins. He was predeceased by a brother Anthony Gagliardi and a sister Angelina Gagliardi Paolella. Funeral from Sisk Brothers Funeral Home 3105 Whitney Ave. Hamden at 9:30 a.m., Mass of Christian Burial at 10 a.m. on Saturday July 7, 2018 in Our Lady of Mt. Carmel Church. Burial in St. Mary's Cemetery. Calling hours are Friday from 5 - 8 p.m. The family has requested that you omit flowers, please send a donation to Sacred Heart Academy, 265 Benham Street, Hamden 06514. Thank you. To leave an online condolence please visit www.siskbrothers.com

With family at his side, Richard A. (Dick) Gagliardi passed away peacefully in Branford on July 2, 2018 at the age of 84. Dick lived a fulfilling life that was enriched by family devotion, service to country, and more than a half-century of... View Obituary & Service Information

The family of Richard A. Gagliardi, Sr. created this Life Tributes page to make it easy to share your memories.

With family at his side, Richard A. (Dick) Gagliardi passed away...