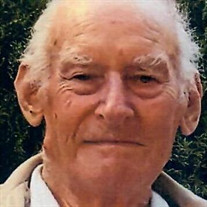 Richard Nelson Doolittle, 91, of Cheshire, Ct., died peacefully in his home Feb. 3, 2020 with his family by his side. Born May 3, 1928, in Hamden, Ct., Richard grew up on a dairy farm owned by his parents Arthur and Ruth Doolittle on West Todd Street in Mt. Carmel, Ct. Here he developed his love of the outdoors, including nature, forestry, beekeeping and gardening. He graduated from Hamden High School and served in the United States Army during the Korean crisis, 1950-52. Richard was honorably discharged from the Army Reserve in 1956. After active service, Richard attended night school at Boardman Trade and New Haven College. He then obtained his master plumber’s license and established the Cheshire Plumbing and Heating Company, which he owned until he retired. Richard met his future wife Anna at the Cheshire Grange No. 23 and the couple were married in 1951 in the Mt. Carmel Congregational Church. They built the home they continued to live in, where Richard pursued his love of the outdoors. Devoted to his family, Richard also was active in public service, holding leadership positions in the Cheshire Fair, the Cheshire Grange and Cheshire Lion’s Club. In 1958 he and Anna were selected Grange Young Couple of the Year. During Richard’s working years, he and Anna supported their children through college and were very close to their grandsons Mark and James Doolittle. After retiring, Richard remained active at his home and garden. He was generous with the fruits of his labors, which he generously shared with neighbors and his friends in the “coffee hour group” in Bethany. Richard is survived by his wife of 68 years, Anna Senkowski Doolittle, elder brother Robert Doolittle, daughter Nancy Doolittle and spouse Dawn Cook, son William Doolittle and wife Lisa, Maureen Doolittle, grandsons Mark and James, step-grandchildren Liz, Patricia and Li, nephews Gary and Theodore Doolittle, niece Dara Fiorillo and husband John, and Barbara Doolittle. Richard was predeceased by his son Allan Doolittle, his sister Evelyn Zwick, his younger brother Edwin Doolittle and his sister-in-law Catherine Doolittle. Funeral services will be Saturday at 11 a.m. in Mt. Carmel Congregational Church. Burial will follow in Mt. Carmel Burial Ground. The family will receive friends Saturday from 9:30 - 10:30 a.m. at Sisk Brothers Funeral Home 3105 Whitney Ave. Hamden. In lieu of flowers contributions to Mt. Carmel Congregational Church 3284 Whitney Ave. Hamden. To leave an online condolence please visit www.siskbrothers.com

Richard Nelson Doolittle, 91, of Cheshire, Ct., died peacefully in his home Feb. 3, 2020 with his family by his side. Born May 3, 1928, in Hamden, Ct., Richard grew up on a dairy farm owned by his parents Arthur and Ruth Doolittle on West Todd... View Obituary & Service Information

The family of Richard N. Doolittle created this Life Tributes page to make it easy to share your memories.

Send flowers to the Doolittle family.