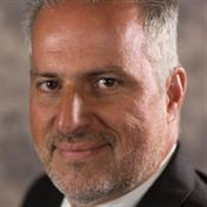 Paul J. Panaroni Sr.,59,of Hamden passed away Sunday June 10,2018 at Yale-New Haven Hospital as the result of a motorcycle accident. He is survived by his beloved wife Veronica Pollock Panaroni, his loving sons Paul J. Panaroni Jr. and wife Sarah of North Haven, Nicholas C. Panaroni of St. Augustine,FL and Gregory M. Panaroni of Hamden, and a cherished granddaughter Isabella Panaroni. Also survived by a sister Carol Santagata of Wallingford, two brothers Peter A. Panaroni Jr. and his wife Maureen of Hamden and David Panaroni and his girlfriend Allison of Hamden and an uncle Frank Panaroni of Naugatuck He also leaves nieces and nephews; Anthony and Emma Panaroni and Jamie Santagata. He was born May 26, 1959 in New Haven a son of the late Peter A. and Katherine Inglese Panaroni Sr., was a graduate and scholarship athlete at Hamden High School class of 1977 where he was a Senior Captain of the football team. He was also a scholarship athlete at the University of Rhode Island where he made the Dean's List and earned a Bachelors Degree. Paul was a proud supporter of HHS Football and was inducted into the HHS hall of fame. He was a former board member of the Hamden Gridiron Club and was Volunteer Co-coordinator of the HK III Memorial Flag League. He had been a valued member of the staff at EDS, DMR Consulting, the Hartford and most recently Fiserv, where he was a project manager. Paul was an avid motorcyclist, better known to his riding crew as "the Road Captain". He will long be remembered as a molder of young men, a mentor and leader in the community and a hero and legend in his own right, but most of all a beloved father, brother, husband and grandfather . Friends are invited to go directly to Our Lady of Mt Carmel Church, 2819 Whitney Ave., Hamden for a Mass of Christian Burial to be celebrated at 9:30 am Friday, June 15th. Calling hours at Sisk Brothers Funeral Home,3105 Whitney Ave.,Hamden will be Thursday, June 14th from 4:00 to 8:00pm. www.siskbrothers.com

The family of Paul J. Panaroni Sr created this Life Tributes page to make it easy to share your memories.

Send flowers to the Panaroni family.