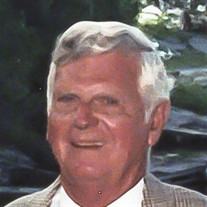 Paul T. O’Brien of Venice, FL, and North Haven CT, passed away peacefully at age 88 on Tuesday, June 12th at Connecticut Hospice, Branford CT. He is the husband of Carol Reynolds O’Brien who survives him at home. They would have celebrated 62 years of marriage in August. The son of Edmund (Sr.) and Irene O’Brien, Paul was born and raised in Meriden CT, and was a graduate of Meriden High School in 1948. He attended the University of Pennsylvania, and received his degree from the Wharton School of Business in 1953. Upon graduation from college, Paul entered the US Army as a lieutenant, and served honorably in Korea from 1953 to 1955. After returning from Korea, Paul went to work for the Southern New England Telephone Company, and had a long successful career in Labor Relations Management. While at the University of Pennsylvania, Paul met the love of his life, Carol Reynolds, and were married in 1956. They settled in North Haven, CT, and raised five children: Dr. Kevin T. O’Brien (Tracy), Karen O’Brien Miller (William), Kimberly Mihalsky (Dr. Stephen), Kristine Miller (Thomas), and Kyle O’Brien (Elizabeth). Paul and Carol were blessed with 13 grandchildren: Thomas O’Brien (Jenny), Kelsey O’Brien Perkins (Jake), Samantha O’Brien, Christopher Mihalsky (Anna), Paige Mihalsky, Carolyn Miller, Daniel Miller, Scott Miller, William Miller, Kenna O’Brien, Keith O’Brien, and Declan O’Brien. Paul was predeceased by his granddaughter Elizabeth Miller who will give him a big hug in heaven. Paul was predeceased by his brother Edmund O’Brien Jr., and his sister Mary Ellen Kaemmer. Paul was an avid Boston Red Sox and New York Giants fan. He also enjoyed following the UConn woman’s basketball team, and was known to watch each game several times, depending on the outcome. Paul enjoyed playing tennis, and was a member of the High Lane Club in Hamden, CT, Venice Golf and Country Club in Florida and New Haven Country Club in North Haven, CT. Paul also enjoyed traveling, and never met a beach he didn’t like. He especially enjoyed the annual family reunions, where he could be in the company of those he loved. Paul was never afraid to speak his mind, and lived his life with purpose and integrity. He was known to honor a special family event with a poem of his own making, both humorous and exposing the love he had for his family. A Mass of Remembrance will be held on Monday, July 16th at 10 A.M. in Our Lady of Mount Carmel Church, Hamden, CT. Donations can be made to the Juvenile Diabetes Research Foundation (www.jdrf.org) or The Connecticut Hospice, Branford, CT. (www.hospice.com).Arrangements by Sisk Brothers Funeral Home, 3105 Whitney Ave., Hamden Ct. www.siskbrothers.com

Paul T. O&#8217;Brien of Venice, FL, and North Haven CT, passed away peacefully at age 88 on Tuesday, June 12th at Connecticut Hospice, Branford CT. He is the husband of Carol Reynolds O&#8217;Brien who survives him at home. They would have... View Obituary & Service Information

The family of Paul T. O'Brien created this Life Tributes page to make it easy to share your memories.

Send flowers to the O'Brien family.