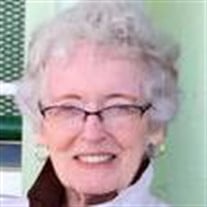 Patricia Ann Schreck died unexpectedly on August 10, 2016 in New Haven, Connecticut. Pat is survived by her husband Ray, her brothers Thomas and John O’Rourke, her children Richard Schreck, Kristina Ellis, and Rachel Schreck, her son in law Joseph West, as well as her grandchildren Cate, Sophie, Hannah, Sam, Kylie, and Molly. She has been preceded in death by her daughter Julie Schreck and her parents Patrick and Molly O’Rourke. Patricia was born on January 24, 1935 in New Haven, CT. She graduated from The Gateway High School and went on to Albertus Magnus College from where she graduated with a degree in the arts. She was a multisport athlete and an accomplished pianist. She was married to Raymond Schreck in 1961. While successfully pursuing her Master’s degree in education at Fairfield University, she began her teaching career at St Mary’s HS in New Haven before moving on to Guilford HS, Laurelton Hall and finally North Branford HS where she taught French, German, and Latin. Pat enjoyed spending time with her grandchildren, sharing her wit with family and friends, and making the occasional wager. She was also active in the New Haven chapter of Recording for the Blind. A memorial mass will be celebrated for Pat on Monday August 15th, at 11:00 AM at St. Rose’s Church 115 Blatchley Avenue, New Haven, CT 06513 Reception to follow. In lieu of flowers, please send donations to Heifer International. http://www.heifer.org

The family of Patricia Ann Schreck created this Life Tributes page to make it easy to share your memories.

Send flowers to the Schreck family.