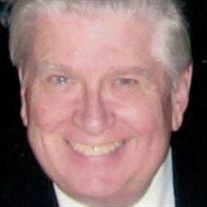 Michael S. Shea Jr., 79 of Cheshire, formerly of New Haven, beloved husband of Margaret F. Higgins-Shea, passed away Sunday, (October 7, 2018), at MidState Medical Center in Meriden of MDS, a blood cancer. In addition to his wife, he is survived by his step-daughter Margaret B. Higgins (Francis S. Saunders, III) and was blessed with two granddaughters Belinda R. Higgins-Saunders (Bea), and Francesca E. Higgins-Saunders (Birdie). He is also survived by many cousins, including the Shea, Sweeney and Williams families. He was predeceased by his parents, Dr. Michael S. Shea Sr., and Grace Helen (Hutchinson) Shea, and a foster sister Eleanor Killarney. Michael was a life-long bachelor until he met his wife Margaret and was married at the age of 63. He often said it was the best decision he ever made because he was also gifted with her family and grandchildren. A true son of New Haven, he graduated Sacred Heart Grammer School, where he formed friendships with Herbert Lynch and Edward Daddio, which lasted a lifetime. He was also a graduate of St. Mary’s High School, Providence College, and Fairfield University. Michael worked at Malley's Department Store, as a teacher in New Haven, and as a real estate broker with Seabury-Hill. But his greatest work was caring for both of his parents in the twilight of their lives. Michael was a member of many organizations, including The Wild Geese, The Connecticut Irish American Historical Society, The Irish History Round Table, The Ancient Order of Hibernians, The Irish American Community Center, and The Gaelic-American Club in Fairfield. Michael’s unwavering Catholic faith and sense of humor helped him to maintain a positive outlook even when faced with adversity. He was a fourth degree Knight of Columbus, and a trustee at Sacred Heart Church in New Haven. He strove to be of service to his fellow human and was on the advisory board of The Salvation Army of New Haven. A Mass of Christian Burial will be Celebrated Saturday at 10 a.m. in Our Lady of Mt. Carmel Church. Friends are asked to go directly to church. Burial in St. Mary's Cemetery. Calling hours are Friday 3 - 7 p.m. in Sisk Brothers Funeral Home 3105 Whitney Ave. Hamden. In Lieu of flowers, his family kindly asks for donations to Sacred Heart Academy 265 Benham St. Hamden CT, and Mercy High School 1740 Randolph Road Middletown, CT. To leave an online condolence please visit www.siskbrothers.com

Michael S. Shea Jr., 79 of Cheshire, formerly of New Haven, beloved husband of Margaret F. Higgins-Shea, passed away Sunday, (October 7, 2018), at MidState Medical Center in Meriden of MDS, a blood cancer. In addition to his wife, he is survived... View Obituary & Service Information

The family of Michael S. Shea, Jr. created this Life Tributes page to make it easy to share your memories.