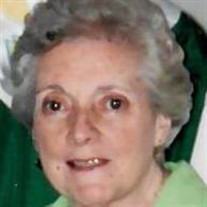 Maureen Sheehan McTague, 89, of North Haven passed away Monday, April 15, 2019 at Yale New Haven Hospital surrounded by her family. A beloved wife and mother, Maureen was predeceased by her husband Michael McTague. She is survived by her son Joseph M. (Patricia) McTague of Wallingford and by her five daughters, Joanne M. (William) Day of North Haven, Rosemary M. (Alex) Navickis of Wallingford, Kathleen A. Crozier of Hamden, Marguerite M. (Jon) Romeo of Cheshire and Mary B. (Bruce) Kleffke of North Haven. She is also survived by her cherished grandchildren Michael (Molly) and Terence McTague, Stephen Day, Olivia and Emma Navickis, Brian, Timothy, and Daniel Crozier, Christopher and Matthew Romeo, Sarah, Hannah, and Abbey Kleffke, and by her beloved great-granddaughter Rose. Maureen was the oldest of ten children and is survived by her brother Dominick Sheehan of Hamden and four sisters, Agnes Flynn of Hamden, Peggy Simpson of Tennessee, Brid Malone of Ireland and Pat Clancy of Ireland. She is also survived by many nieces and nephews both here and in Ireland. Maureen was predeceased by her brothers Jack and Senan Sheehan and sisters Kitty O’Shea and Anna Sheehan. Maureen was born February 10, 1930 in Ennis, Co. Clare, Ireland. She was the daughter of the late Dominick and Kathleen (Scales) Sheehan. She immigrated to the U.S. in 1948. She was a communicant of St. Rita Church, where she was a member of the Ladies Guild. Maureen’s greatest joy was her family, especially her grandchildren. She enjoyed her many trips to Ireland with her husband and traveling with family to Bermuda, Canada, Spain, England, and throughout New England. She looked forward to family trips to the beach in Rhode Island. Maureen was a member of the Irish American Community Center/New Haven Gaelic Football & Hurling Club. She spent many hours working in her garden and took pride in being a good neighbor. A mass of Christian Burial will be celebrated Tuesday morning at 10:00 in St. Rita Church, Hamden. Burial will follow in St. Mary’s Cemetery. Friends may call at Sisk Brothers Funeral Home, 3105 Whitney Ave., Hamden on Monday from 4:00-8:00 p.m. www.siskbrothers.com

Maureen Sheehan McTague, 89, of North Haven passed away Monday, April 15, 2019 at Yale New Haven Hospital surrounded by her family. A beloved wife and mother, Maureen was predeceased by her husband Michael McTague. She is survived by her son... View Obituary & Service Information

The family of Maureen McTague created this Life Tributes page to make it easy to share your memories.

Send flowers to the McTague family.