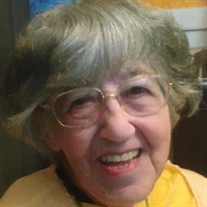 Mary Spinnato Mazzacane, age 97, of Hamden passed away at Branford, Connecticut on June 17, 2020. Born Nov. 25, l922 in New Haven, CT. She was the daughter of Lorenzo and Vincenzina Giangarra Spinnato.. She was the wife of the beloved late Joseph B. Mazzacane, Jr. for 60 years. Loving mother of Loren Mazzacane , professionally known as Loren Connors, (Suzanne) of Brooklyn, New York, Gail (Richard) Dalby of Branford and Roy Mazzacane (Peter Buccetti) of Hamden . Also survived by her cherished grandson, Jamie Connors of New York and several loving neices and nephews. She was predeceased by her siblings, Angelina Spinnato Cestaro of Hamden, Paul Spinnato of Branford, and Josephine Spinnato Kowalski of Cheshire. She was a l940 Hillhouse High School graduate and graduated from the Whitney Business College, followed by secretarial positions at H.B. Ives Co and the A.C. Gilbert Co. She was a graduate of the Yale University School of Music, B.M. l947 where she received the Charles R. Ditson Scholarship, the Benjamin Jepson Memorial Prize, the Clifton Brewer Scholarship and a Senior Year Scholarship. She studied for 2 years at the Yale University School of Drama while at the Music School. She attended the University of Bridgeport for Music Education Courses and graduated from the Southern Conn. State University, M.S. l976. She studied Voice for several years with Maestro Francesco and Hilda Riggio, Artistic Directors of the Connecticut Experimental Theatre. She was a member of the CT Experimental Theatre and sang several leading roles in Opera such as Madame Butterfly, Cavalleria Rusticana, La Boheme, Otello, Tosca, The Consul, The Old Maid and the Thief, Amahl and the Night Visitors among several others. She has presented many song recitals throughout New England and performed on radio and television. She later became the Co-Artistic Director of the CET Opera Theatre and the Theatre continued with the presentation of several complete operas. She was a teacher of Voice and Music Theory at the Neighborhood School of Music and in her home studio, Music Teacher at the West Haven Nursery School, Teacher of Music, Drama, Oral Recitation and Speech Improvement at the Lorraine D. Foster Day School K-8 for l0 years. Also, Music Teacher at the Fair Haven Middle School and Betsy Ross Middle School in New Haven for l3 years. In addition, she taught music at the South Central Community College in New Haven and the Foote School. For many years, Mary was a Girl Scout Leader and was a soloist and member of the New Haven Woman’s Choral Society. She was a soloist and Choir Director at the Grand Ave. Congregational Church in New Haven for many years and then was soloist and Choir Director at St. Rita Roman Catholic Church in Hamden for 33 years. Later, she was Choir Director at Grace and St. Peter’s Episcopal Church in Hamden. She was soloist in several area churches for many years. She was the recipient of the Distinguished Service Award from the Italian American Historical Society in l994 and also received an award from S.C.S.U. for her work in Music Education –“Innovative Teaching of Music”. After retiring from teaching Mary began a career in puppetry. She was very active in the world of Puppetry working well into her nineties. She was an Adjunct Instructor of Puppetry at S.C.S.U.; became a member of the CT Guild of Puppetry and was a past president for 3 years. She was a member of the Puppeteers of America. She has performed extensively throughout the area with puppets for all ages in schools, libraries, churches, birthday parties, fairs, corporations, clubs, festivals, convalescent and retirement homes. She has also presented numerous in-service puppet workshops for teachers and also puppet workshops for children which included construction, manipulation, improvisation and performance. In addition, she presented a puppet workshop on “Puppetry in Education” at the Northeast/Mid-Atlantic Puppet Festival. She has presented many lectures and demonstrations throughout Connecticut dealing with her book “Music Education Through Puppetry” including a televised demonstration on WTNH. A chapter on “Music Education Through Puppetry” also appears in the book “Puppetry in Education” by Bernier and O”Hare. Mary practiced Transcendental Meditation since 1979. Graveside services were held privately at St. Lawrence Cemetery. A Memorial Mass will be held at a later date. In lieu of flowers contributions to the American Parkinson Disease 135 Parkinson Ave. Staten Island, NY 10305 or to the BSF Foundation (World Peace Fund) 1100 N. 4th St. Suite 124, Fairfield, Iowa 52556 and is a 501C3 non-profit, contributions are tax deductible. Sisk Brothers Funeral Home 3103 Whitney Ave. Hamden in care of arrangements. To leave an online condolence please visit www.siskbrothers.com

Mary Spinnato Mazzacane, age 97, of Hamden passed away at Branford, Connecticut on June 17, 2020. Born Nov. 25, l922 in New Haven, CT. She was the daughter of Lorenzo and Vincenzina Giangarra Spinnato.. She was the wife of the beloved late Joseph... View Obituary & Service Information

The family of Mary Spinnato Mazzacane created this Life Tributes page to make it easy to share your memories.

Mary Spinnato Mazzacane, age 97, of Hamden passed away at Branford,...

Send flowers to the Mazzacane family.