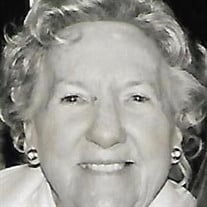 After living a happy and full life, Margaret “Peggy” (Boyce) Dunn, age 93 and former longtime resident of the Elm City, died peacefully in East Providence, RI.  Wife of the late Daniel J. Dunn, Sr. who was the brother of her school friend the late Jane F. Dunn, Peggy and her husband Daniel remained sweethearts for 55 years.  She is survived by her children Margaret M. Dunn of Millsboro, Delaware, Eileen Socha of East Providence, RI, and Daniel J. Dunn, Jr. (daughter-in-law Bonnie), of Manhattan.  Also survived by her five cherished grandchildren and four great grandchildren. Always the "fun Aunt," she was much beloved by her nearly forty nieces and nephews and all their children.  Daughter of Irish immigrants, Dennis and Margaret Morris Boyce, she was predeceased by her three brothers Dennis, Thomas, and William Boyce.  Peggy was born and raised in the Newhallville section of New Haven, raised her family in the East Shore, and spent her last few years in Rhode Island to be closer to her daughter, Eileen.    A longtime teller at the First New Haven National Bank, Peggy was a fixture at the One Church Street main branch across from Macy’s and her outgoing personality made her a familiar and welcoming presence to those who did their banking downtown in the 1960s, ‘70s, and ‘80s. Peggy was also an enthusiastic supporter of her son and his hockey teammates, well known for ringing her cow bell to cheers of “Let’s Go New Haven!” and Let’s Go (Fairfield) Prep!” across local hockey rinks during the 1970's and ‘80s. Peggy remained the life of the party into her 90s, always leaving with a laugh and her signature line, “I had a lousy time!”    Strong of faith and brave of heart, Peggy never complained of the health challenges she faced during her later years and was an inspiration to her family and the many of whom she befriended along the way. Beloved and boisterous Peggy Dunn passed with equanimity, resolve and grace, and she lives on in the hearts and memories of all who knew her.    In lieu flowers, please consider a contribution to the Saint Bernadette Church and School, New Haven, in Peggy’s memory.  Funeral from Sisk Brothers Funeral Home 3105 Whitney Avenue Hamden on Monday at 9:30am, Mass of Christian Burial at 10 a.m. in St. Bernadette Church. Burial will follow in St. Lawrence Cemetery. The family will receive friends Monday from 8:30 - 9:30 a.m. at Sisk Brothers. To leave an online condolence please visit www.siskbrothers.com

After living a happy and full life, Margaret &#8220;Peggy&#8221; (Boyce) Dunn, age 93 and former longtime resident of the Elm City, died peacefully in East Providence, RI.  Wife of the late Daniel J. Dunn, Sr. who was the brother of her school... View Obituary & Service Information

The family of Margaret "Peggy" Dunn created this Life Tributes page to make it easy to share your memories.

Send flowers to the Dunn family.