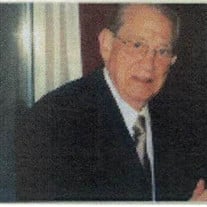 Profesor Luis García-Abrines Calvo, age 92, passed away on Tuesday, May 17, 2016, in New Haven, Connecticut. He is survived by his wife of 49 years, Marie García-Abrines, Professor Emerita of SCSU; his twin daughters, Linda Isaacs (John) and... View Obituary & Service Information

The family of Luis Garcia- Abrines created this Life Tributes page to make it easy to share your memories.

Send flowers to the Abrines family.