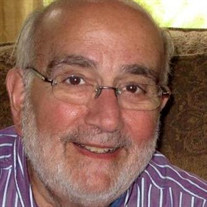 Louis Salvatore Negri, 77, of Cheshire passed away on February 1, 2018 after a long battle with cancer. He was born in New Haven on November 9, 1940, son of the late Luigi and Clementina Negri. He graduated from Notre Dame High School in West Haven and went on to receive his bachelor’s degree from Southern Connecticut, MA Fairfield University, BMEd University of Hartford, MA University of Bridgeport, and his PhD in Music from Walden University. Lou was the Choral Director at West Haven High School (1963-2002) and Hamden Hall Country Day School (2005-2016). He also worked as a Music Director at many churches over the years including St. George Church, Guilford (1986-2004) and Saints Peter & Paul Church, Wallingford (2004-2017). In addition, over the years Lou was Music Director at the American Shakespeare Theater, Chorus Master for New Haven Opera, created Teen Opera New England, he was an accomplished pianist, singer, composer, and directed more than 100 musicals and operas. His choirs performed for the Pope at the Vatican, the White House, the Kennedy Center, as well as multiple European tours. He was named Italian-American of the Year for West Haven in 2001. As a teacher, he inspired thousands of students to perform to their highest potential and taught them valuable life lessons. He was a fan of the NY Giants, Yankees, loved crosswords, and was devoted to his dogs. He leaves behind his wife Cynthia Morgan, his two children Alana Negri (partner Rob Kowalczyk) of Glastonbury, Louis M. Negri (fiancée Nicole Anastasio) of Saco, ME, and two step children Katie Morgan DePasquale (Tony) of Boston, MA and Patrick Morgan (Abigail) of Ellington. In addition to his parents, he was predeceased by his brother, Carmine Negri. A special thank you to the doctors and nurses at Smilow who cared for Lou over the years, especially Dr. Michael Hurwitz, Kristen Crowley, and Donna Andruskewic. A Mass of Christian Burial will be celebrated on Wednesday, February 7th at 11 a.m. in Our Lady of Mt. Carmel Church, Hamden. Friends are asked to go directly to the church. Burial will be in All Saints Cemetery. Calling hours are Tuesday, February 6th from 4-8 p.m. at Sisk Brothers Funeral Home, 3105 Whitney Ave, Hamden. In lieu of flowers contributions can be made to Smilow Cancer Center-Closer to Free, Office of Development, YNHH P.O. Box 1849 New Haven, CT 06508-9979. To leave an online condolence please visit www.siskbrothers.com

Louis Salvatore Negri, 77, of Cheshire passed away on February 1, 2018 after a long battle with cancer. He was born in New Haven on November 9, 1940, son of the late Luigi and Clementina Negri. He graduated from Notre Dame High School in West... View Obituary & Service Information

The family of Louis Salvatore Negri created this Life Tributes page to make it easy to share your memories.

Louis Salvatore Negri, 77, of Cheshire passed away on February...

Send flowers to the Negri family.