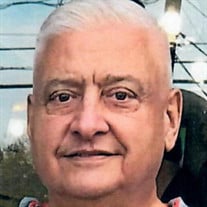 Leonard Robert Mirto, Jr., 74, of North Haven, CT passed away peacefully on February 25, 2020 at his home after a courageous battle with colon cancer. Len was born on December 14, 1945 to Leonard R. Mirto, Sr. and Josephine Guadagno Mirto in New Haven, CT. After graduating from Hamden High School in 1963, he went on to study at Southern Connecticut State College. Len married his college sweetheart, the late Carolyn Forbes Mirto, and they went on to have three daughters, Paula M. Bleakley (the late William R. Bleakley; Radu Tarta); Denise Sandra Moses; and Jody E. Clouse (Mendy K. Clouse). Len was predeceased by his parents and his wife, Carolyn. He is survived by his brother, Robert J. Mirto (Kathy Messina Mirto); his daughters; his five grandchildren, Liam F. Bleakley, Jacqueline V. Moses, Connor M. Bleakley, Mya J. Clouse, and Sylvia E. Clouse; Christopher Forbes, Matthew Poryanda and a large loving extended family. For Len, family was most important. He treasured the time he spent traveling with Carolyn, playing or watching sports with his brother Bob, having Sunday dinners with his parents, cheering his daughters and grandkids on from the sidelines, and making everyone laugh at each of these family events. Len spent many years working in the insurance industry and various forms of athletics. He sincerely valued his relationships with friends in the athletic departments at Yale University, Quinnipiac University and Hamden High School. He truly considered the people there to be his extended family. Athletics was a theme throughout Len’s life. Playing, collecting, and following sports on many levels - from high school to professional - brought him much joy. He played baseball and softball in Hamden for many years - at times on the same team as his brother and father. Len loved collecting sports memorabilia and had a wealth of knowledge about players, statistics, teams and trivia. His involvement as an announcer, manager and commentator for several semi-pro football teams earned him multiple championship rings. Len loved to travel. He toured Europe on his honeymoon with Carolyn, as well as brought his family on many trips both in and out of the country. He enjoyed learning about other cultures, meeting people from other places, and sampling foods from around the world. His knowledge of diverse places and cultures made him a fierce opponent in many Trivial Pursuit games. During the course of his illness, Len felt safe and comforted by caregivers at Smilow Cancer Hospital including Dr. Jeremy Kortmansky, Dr. Michael Cecchini, Dr. Dmitry Kozhevnikov, Kathy Farrelly, Robin Esposito, and Corey Bower. He was grateful for the companionship of Matthew McCluster. Len opened his heart to many causes. He often contributed to organizations supporting animal rescue, police, emergency responders, Veterans, the US troops, and many health-related charities, including JDRF. In lieu of flowers, random acts of kindness would touch Len’s heart. The family will be receiving visitors at Sisk Brothers Funeral Home, 3105 Whitney Avenue, Hamden, CT on Sunday, March 1, 2020 from 10:30 AM – Noon with an informal memorial service at 11 AM.

The family of Leonard R. Mirto Jr. created this Life Tributes page to make it easy to share your memories.