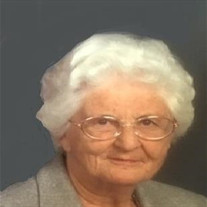 Kathryn “Kiki” Gabriel Sullivan Goode, 91, of New Cumberland, PA, formerly of State College, PA, passed away peacefully on December 22, 2018, at Country Meadows Retirement Community, surrounded by her loving family. She was born on April 21, 1927, in New Haven, CT, to Edward J. Sullivan and Kathryn O’Keefe Sullivan. She is predeceased by her parents, her sister Arlene and her loving husband of 66 years, John “Jack” Goode, Jr. She is survived by her five children: Mary Kay Fausey (Bill); John Goode (Cheryl); Alicia Goode; Ellen King (Elaine); and Kathryn Goode (Kim). Also surviving are grandchildren Caitlin Fausey, Darcie Fausey, Claire Fausey, Scott Goode, Matt Goode (Diane), Jason Bordner, Mike Bordner (Becky), Leigh Charron (Jake), Meghan Brewster, Danielle King, Lauren King (Andrew), Ken Towne, Karlie Towne and Keara Towne. Great-grandchildren Mischa, Isabelle, Evelyn, Mary Jane, Darrius, Amaiyah and Evelynn also survive. Kiki graduated from Hillhouse High School in 1945 and from Manhattanville College in 1949 with a degree in Social Studies Education. After graduation, Kiki was employed as a social worker with the State of Connecticut. On December 2, 1950, she and Jack married at St. Aedan’s Church in New Haven, CT. Kiki and Jack started their family and lived in Hamden before relocating to State College, PA, in 1961. Kiki worked in the State College Area School District in the Pupil Personnel Services department and later in the Guidance Office of the State College Area Senior High School, retiring in 1986. Kiki continued to serve her community as a volunteer at Centre Community Hospital and Our Lady of Victory Church where she assisted the office staff and served as a Eucharistic Minister. During retirement, she assisted each of her children as grandchildren were added to her cherished family. She provided loving support to each of the grandchildren and often took them on vacation with “Gram and Pop”! She moved to New Cumberland, PA, in 2006, where she continued to enjoy retirement. Kiki loved to sing Irish songs and was always ready for a hearty rendition of “When Irish Eyes Are Smiling”! When asked what was most important to her, she responded, “Faith and Family”. Kiki will be remembered as a devoted wife, mother, grandmother and great- grandmother. Kiki’s final difficult journey was warmly and lovingly supported by her children and caregivers. A special debt of gratitude is owed to Kiki’s son and daughter-in-law, John and Cheryl, as they were the primary caregivers and advocates throughout Kiki’s twilight years. On Friday, December 28, 2018, visitation will be at Sisk Brothers Funeral Home, 3105 Whitney Ave. Hamden, CT, from 9:00-10:15 AM, with a Mass of Christian Burial at St. Aedan’s Church, New Haven, CT, at 11:00 AM, followed by interment at St. Lawrence Cemetery. In lieu of flowers, please consider donating to the Alzheimer’s Association or a local Catholic charity. www.siskbrothers.com

The family of Kathryn "Kiki" Goode created this Life Tributes page to make it easy to share your memories.

Send flowers to the Goode family.