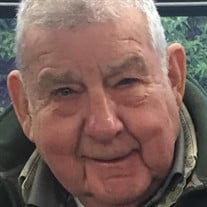 Joseph Francis Regan, 85, of North Branford and The Villages, FL, passed away peacefully on May 7. He leaves his high school sweetheart and beloved wife of 57 years, MaryLou (Spillane) Regan. Joe was born Jan. 11, 1936 to Irish immigrants Joseph Patrick and Julia (Dillon) Regan. He was raised in Fair Haven with his younger brother, Richard, and attended St. Francis Grammar School and graduated from Wilbur Cross High School. Joe attended Connecticut State Teachers College (now CCSU), graduating in 1958 and began teaching in West Haven Public Schools. After two years he moved to Morgan High School (Clinton), where he spent 34 years teaching business skills and accounting until his retirement in 1994. He made many lifelong friends among the other teachers and reveled in the affectionate nickname, “Rotten Regan,” given to him by his students. During that time, Joe and Lou made their home in North Branford, he earned two master’s degrees, and he worked multiple jobs to support his growing family. He joined the Army Reserve and served weekends and summer tours as a chief warrant officer. His wanderlust led him to ask for summer assignments at Fort Huachuca in Arizona so that he could take his family on cross-country camping adventures. There were years of road-trips around New England and, particularly, his beloved Cape Cod. For decades, Joe ran an accounting and tax practice in his home and as the practice grew by word-of-mouth it became a whole-family endeavor. In the early 2000s, he attempted to retire by merging his practice with a pair of younger accountants, Woodbridge & Cusano, but he outlasted their retirement and continued with his clients even into the start of the 2021 tax season. Inspired by his immigrant parents and his humble upbringing, it was his passion to help his clients, who became friends, to pursue financial security. In addition to his wife, Joe leaves his four children and their significant others, Joe and Betsy, Larry and JoAnn, Tara and Scott (Simler), and Tricia and Stefan (Richman); a wide circle of in-laws with whom he enjoyed spending birthdays and holidays; and his pride and joy, 11 grandchildren - Ryan (and his new wife Emily), Olivia, Will, Paige, Emma, Brenna, Abby, Kyle, David, Megan and Kelsey. He also leaves his two sisters-in-law, Helen Regan and Kathy Abate and her husband Art. He was predeceased by his brother, Rich (Dick) Regan. The family wishes to thank the staff of nurses at Connecticut Hospice, as well as the dedicated accounting staff at Murphy & Company in Branford who have shouldered an unexpected burden this tax season. In lieu of flowers, please consider a memorial contribution to Connecticut Hospice, 100 Double Beach Road, Branford, CT 06405. Friends are asked to go directly to St. Ambrose Parish Church of St. Augustine, 30 Caputo Rd., North Branford for a Mass of Christian Burial to be celebrated Saturday morning at 10:00 Burial will be private. Calling hours at Sisk Brothers Funeral Home, 3105 Whitney Ave., Hamden will be Friday from 4:00-7:00pm. Mask and social distancing will be required at both funeral home and church. www.siskbrothers.com

Joseph Francis Regan, 85, of North Branford and The Villages, FL, passed away peacefully on May 7. He leaves his high school sweetheart and beloved wife of 57 years, MaryLou (Spillane) Regan. Joe was born Jan. 11, 1936 to Irish immigrants... View Obituary & Service Information

The family of Joseph Francis Regan created this Life Tributes page to make it easy to share your memories.

Joseph Francis Regan, 85, of North Branford and The Villages,...

Send flowers to the Regan family.