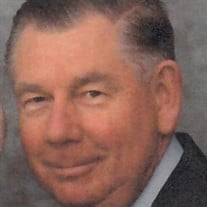 Joseph J. LeGrand Jr., 95, passed away peacefully on Monday, Jan. 4,2021, three days shy of his 96th birthday. Born Jan.7,1925 in New Haven a son of the late Joseph J. and Jennie Tuttle LeGrand Sr. He was a graduate of Hillhouse High School, class of 1942 and served in the US Navy in the South Pacific during WWII. He was a graduate of the American Institute of Banking and was employed for many years with the American Bank & Trust Co., the Second National Bank and the Bank of Boston from where he retired in 1986 as a Vice-President. Joseph served as treasurer of the Lanphier's Cove Assoc. for thirty five years and was an avid NY Mets fan. He was the husband of the late Margaret Wynne LeGrand and Eileen LeGrand and is survived by a son, Joseph J. (Mary) LeGrand III of Wallingford, daughters Susan (Frederick) Kelley of Wallingford and Margaret (Kenneth) McDonald of Northford, grandchildren Kaitlin Snow, Kiernan Willis, Patrick Kelley, Heather McDonald, Michael McDonald, Sarah McDonald and Margaret LeGrand and great grandchildren, Myles, Freddy, Shea and Kellyn. Also survived by a sister Marguerite Ferrucci of North Branford. He was predeceased by a granddaughter Molly LeGrand , a sister Jane Metrick and a brother Charles LeGrand. Due to the current pandemic a Mass of Christian Burial will be privately held in Devine Mercy Parish, Church of St. Rita with burial in All Saints Cemetery with military honors. Memorial contributions may be made to Food For The Poor Inc., 6401 Lyons Rd.,Coconut Creek,FL,33073. Arrangements are with Sisk Brothers Funeral Home,3105 Whitney Ave.,Hamden. www.siskbrothers.com

The family of Joseph J. LeGrand Jr. created this Life Tributes page to make it easy to share your memories.