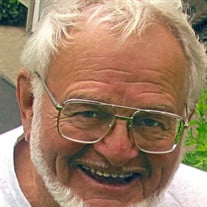 In Hamden, December 8, 2017 John Watson Oertel 93, of Hamden. Beloved husband of Bertha Marie Strobel Peckham Nelson, loving father of James Oertel (Jean) of Port Orange, FL, brother of Albert Oertel of S. Londonderry, VT., stepfather of Karen Peckham (Ray Iovene), James Peckham, Dennis Nelson (Griselda), Pamela Ambrose (Robert) also survived by his stepgrandchildren Tyler, Samantha, Robert Ambrose and Miguel Nelson. He attended the State St. Grammar School, Hamden High School class of 1942. He then enlisted in the US Army in September of 1942, served in the US Eighth Army 1943-1946, was a First Sergeant in the 131st Chemical Company US Army Pacific Command in New Guinea and the Phillipines. He participated in the liberation of the POW camp at Santo Tomas, Manila, Phillipines in February of 1945. John was a 47 year member of the Indian Neck Yacht Club, a 60 year member of the International Association of Bridge, Structural, Ornamental and Reinforcing Iron Workers. He retired as Local #424 Apprentice Coordinator. He was on the Board of Governors and National League Director for the first Hamden Youth Hockey Association in 1968. He played with the New Haven Bears Hockey Club 1950-1951 and was a coach for the Pee Wee Hockey Program started by Lynn Patrick in New Haven in 1947. Mr. Oertel was the recipient of the CT. Veterans Wartime Service Medal from Governor Dannel P. Malloy, the Dr. G. Roy Fugal Award from the CT. State Apprenticeship Council in 1989 and was appointed to the CT. Governors Statewide Advisory Committee for Vocational & Technical Schools By Governor William A. O’Neill in 1989. Mr. 0ertel was a lifetime member of the NRA. Funeral from Sisk Brothers Funeral Home 3105 Whitney Ave. Hamden Wednesday at 9:30 am, Mass of Christian Burial at 10 am in St. Stephens Church, 400 Ridge Rd. Hamden. Burial will follow in Centerville Cemetery, Washington Ave. Hamden. Calling hours are Tuesday from 5 - 8 pm and Wednesday morning from 8:30 -9:30 am. To leave an online condolence please visit www.siskbrothers.com

The family of John Watson Oertel created this Life Tributes page to make it easy to share your memories.

Send flowers to the Oertel family.