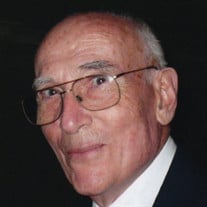 John Francis Goode, Jr., 93, of New Cumberland, PA, formerly of State College, PA, passed away peacefully on August 30, 2017, at Country Meadows Retirement Community, surrounded by his loving family after a long and courageous battle with dementia. He was born on July 20, 1924, in New Haven, CT, to John F. Goode and Eleanor Bishop Goode. He is predeceased by his parents and his sister, Marguerite. He is survived by his loving wife of 66 years, Kathryn Sullivan Goode. He is also survived by his five children, Mary Kay Fausey (Bill); John Goode (Cheryl); Alicia Goode; Ellen King (Elaine); and Kathryn Goode (Kim). Also surviving are grandchildren Caitlin Fausey, Darcie Fausey, Claire Fausey, Scott Goode, Matt Goode (Diane), Jason Bordner, Mike Bordner (Becky), Leigh Charron (Jake), Meghan Brewster, Danielle King, Lauren King (Andrew), Ken Towne, Karlie Towne and Keara Towne. Great grandchildren Mischa, Isabelle, Mary Jane, Darrius, Amaiyah and Evelynn also survive. Jack graduated from Hillhouse High School in 1942 and enrolled at Yale University. On February 20, 1943, he enlisted in the US Army, serving until April 9, 1946. He spent seventeen months in the European Theatre, including France, Germany and Austria, earning the Good Conduct Medal, the Victory Medal, the American Theatre Campaign Ribbon and the European African Middle Eastern Theatre Campaign Ribbon. He then finished his education at Yale University on the GI Bill, graduating in 1949 with a degree in Mechanical Engineering. Jack worked at Sargent Manufacturing in New Haven, CT, followed by employment at Pratt and Whitney in North Haven, CT. He moved to State College, PA, in 1961, and worked for over twenty years at Chemcut Corporation where he rose to the position of Vice President of Manufacturing, retiring in 1985. He then began his second career in volunteer service as a math tutor in the local school district and as a valued assistant at the St. Vincent de Paul Society at Our Lady of Victory Church. During retirement, he crafted many woodworking projects in his basement shop and enjoyed playing golf with friends, a skill he originally honed at the Yale golf club. He moved to New Cumberland, PA, in 2006, where he continued to enjoy his retirement. Jack will be remembered for his devotion to his family, his love for his Irish roots, his beautiful singing voice and his sharp mind and wit. Jack's children want to gratefully acknowledge the loving and compassionate care provided to him by his daughter-in-law, Cheryl. For the last ten years, Cheryl's unfailing advocacy, countless hours of support and selfless devotion to our father improved both the dignity and quality of his journey through dementia. On Tuesday, September 5, 2017, visitation will be at Sisk Brothers Funeral Home, 3105 Whitney Ave., Hamden, CT, from 9:00 – 10:30 AM, with a memorial Mass St. Aedan’s Church, New Haven, CT, at 11:00 AM, followed by interment at St. Lawrence Cemetery. In lieu of flowers, please consider donating to the Alzheimer’s Association or your local St. Vincent de Paul Society. www.siskbrothers.com

The family of John Francis Goode, Jr. created this Life Tributes page to make it easy to share your memories.