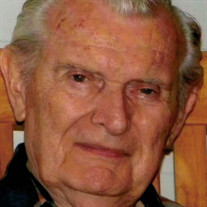 John S. Cusick, 89, of Hamden, passed away peacefully Saturday December 30, 2017 at Yale-New Haven Hospital after a brief illness. He is the son of Stanley and Mary Cusick. He is survived by his loving wife of 61yrs, Julia, children John Jr. (Wendy) of Bethany, Nance of Hamden, and Stephen (Carol) of FL and brother Gerald. Predeceased by brothers Stanley (Karen) and Ronald (Susan) Cusick and sister Mary Ann (Robert) Livieri. He leaves behind two adoring grandchildren, Julia and Maria Cusick, as well as many loving nieces, nephews family and dear friends. Born in 1928 in Wilkes-Barre PA, John served in US Army from 1946 to 1948. as a member of the 298th Army Band in Berlin, playing saxophone. After his service discharge, he returned to PA, attending Kings College, and continued to perform with small musical combos. He moved to CT in 1950, where he began a 35 year career as a machinist and tool maker, while attending University of New Haven. He initially worked for Pratt and Whitney and later at Norden Systems, retiring from there as a machine shop foreman John was a devoted husband, father, a passionate outdoors man and dog lover. He hunted and fished as a youth is his native Pocono Mountains and then later with his family in the waters of Long Island Sound. He was a member in good standing of the City Point Yacht Club. A Mass of Christian Burial will be celebrated at Our Lady of Mount Carmel Church, 2819 Whitney Avenue, Hamden Monday at 11 a.m. Burial with military honors will immediately follow at St Lawrence Cemetery, 280 Derby Avenue, West Haven. Memorial contributions may be made to Wounded Warrior Project (877)-832-6997 or the Multiple Sclerosis Assoc. of America (800) 532-7667. Arrangements are with Sisk Brothers Funeral Home, 3105 Whitney Ave., Hamden. www.siskbrothers.com

John S. Cusick, 89, of Hamden, passed away peacefully Saturday December 30, 2017 at Yale-New Haven Hospital after a brief illness. He is the son of Stanley and Mary Cusick. He is survived by his loving wife of 61yrs, Julia, children John Jr.... View Obituary & Service Information

The family of John S. Cusick created this Life Tributes page to make it easy to share your memories.

Send flowers to the Cusick family.