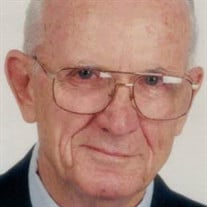 John Francis (Jack) Callahan Sr., age 91, beloved husband for 68 years of Nancy Callinan Callahan of North Haven, CT passed away on January 24, 2019 at home with his loving family at his bedside. He was born in Fair Haven on February 17, 1927 and was the youngest child of the late Daniel Callahan and Annie Reynolds Callahan who had both emigrated to New Haven from County Clare, Ireland. Jack attended St. Francis Grammar school where he met his future wife Nancy in the 6th grade. He graduated from Hillhouse High School, Class of 1945 and was a member of the undefeated 1943 Connecticut State Championship Hillhouse football team. Jack played left guard for the football team where he opened running holes for Hillhouse and future Yale Captain, Levi Jackson. He also had the honor of playing in the Yale Bowl on Thanksgiving Day for the Hillhouse vs West Haven rivalry games. Immediately after his graduation from high school, he joined the United States Army and was stationed in Fort McClellan, Alabama as the war ended. In January 1946, he was sent to Germany and assigned to the 560th Tank Ordnance unit located near Nuremberg. Jack told many stories of his experiences in this post war period including witnessing the Nuremberg trials. Upon his return to the states, he worked for the United States Post Office for well over 40 years. Jack and his family lived for 45 years in Morris Cove before moving to North Haven. During his retirement years, he enjoyed many vacations with his wife and family traveling across the United States and Europe with special visits back to Germany and Ireland. His lifetime dream was a trip to the Kentucky Derby which he fulfilled in 2001. He is survived by his loving daughter MJ Callahan of North Haven and his devoted son Jack Callahan, Jr, the Senior Vice President for Operations at Yale University; and his daughter-in law April Callahan, along with 3 cherished grandchildren, Ryan, Kate and Carey Callahan of New Canaan. Jack is survived by his adoring sister Eileen Callahan Durkin of North Branford. He was predeceased by his brothers James Callahan and Joseph Callahan and his four sisters; Catherine Callahan Twohill; Margaret Callahan Gunning; Agnes Callahan Hackett and Nancy Callahan along with four generations of nieces and nephews. The family would also like to thank Dr. Mark Kasper who provided outstanding care over the years along with Dr. Scott Gettinger and the entire Smilow lung cancer team at Yale New Haven Hospital for their support and encouragement over the last 7 years. His funeral procession will leave the Sisk Brothers Funeral Home, 3105 Whitney Avenue, Hamden on Tuesday morning January 29, 2019 at 9:15am. A Mass of Christian Burial will be celebrated in Saint Francis Cabrini Church, North Haven at 10:00am. Interment with full military honors will follow in St. Lawrence Cemetery. The visiting hours will be on Monday, January 28 from 4:00 to 7:00pm. Memorial Contributions may be made to St. Francis Grammar School, 423 Ferry Street, New Haven, CT. www.siskbrothers.com

John Francis (Jack) Callahan Sr., age 91, beloved husband for 68 years of Nancy Callinan Callahan of North Haven, CT passed away on January 24, 2019 at home with his loving family at his bedside. He was born in Fair Haven on February 17, 1927... View Obituary & Service Information

The family of John Francis (Jack) Callahan Sr. created this Life Tributes page to make it easy to share your memories.