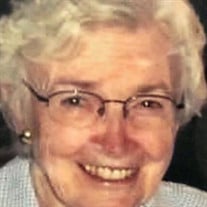 Joan Beattie Conners, 90, of Orange, Ct passed away peacefully at her home on June 23, 2021, surrounded by her family. She was the loving wife of the late William L. Conners, Sr. Joan was born and raised in New Haven, the daughter of John R. and Agnes Kane Beattie. She is survived by her beloved sister Frances Beattie Shepherd of Arlington VT, her children Mary Conners Ashmore, Frances Conners (James Hamilton), Anne Conners (Keith Lawrence), Jennifer Conners, William Conners, Jr. (Pia), and John Conners (Kirche Zeile), and several nieces and nephews whom she loved so dearly. She was predeceased by her brother John R. Beattie, Jr. Joan loved children and was most joyful when surrounded by her grandchildren including Gillian Lawrence, Robert Douglas and Lucille Hamilton, Maeve Ashmore, Elizabeth and Timothy Antalik, Liam, Ethan and Elaria Conners, and William Wolfrum and Aoife Conners. Before raising her large family, Joan attended Hillhouse High School and New Haven State Teacher’s College and taught first and second grade in New Haven. She cherished her memories of her time in the classroom with her students. One of the highlights of her years was traveling to Ireland to see the homeland of her grandparents. Joan’s life was guided by her deep faith; she was a parishioner of Holy Infant Church in Orange where a mass of Christian Burial will be held on Monday, June 28th at 11am. Entombment will be in St. Lawrence Mausoleum. The family would like to thank Joan’s caregivers and friends who provided love and comfort to her throughout the past few weeks and years. Joan supported countless charities focused on the needs of children, so in lieu of flowers, contributions can be made in her memory to a children’s charity of choice. May God hold her in the palm of His hand. Sisk Brothers Funeral Home 3105 Whitney Ave. Hamden in care of arrangements. To leave an online condolence please visit www.siskbrothers.com

Joan Beattie Conners, 90, of Orange, Ct passed away peacefully at her home on June 23, 2021, surrounded by her family. She was the loving wife of the late William L. Conners, Sr. Joan was born and raised in New Haven, the daughter of John R.... View Obituary & Service Information

The family of Joan Beattie Conners created this Life Tributes page to make it easy to share your memories.

Send flowers to the Conners family.