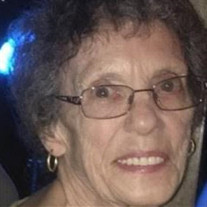 In CT. Hospice October 8, 2021 Jane F. Sarno 83, of Hamden. Beloved wife of Michael J. Sarno. Loving mother of Michael C. Sarno of Hamden, Robert Belevich of Meriden and Bruce Belevich of FL, sister of Joan Ferraro (her best friend) of Hamden, Nancy Vagnini of Hamden, Irene Miller of West Haven, Sandra Laudano of East Haven and Lorraine Brewer of Pompano Beach, FL. Predeceased by brothers James and David Brewer and a sister Pauline Sargolini. Mrs. Sarno grew up in W. Haven, graduated West Haven High School Class of 1955. After high school she worked as a waitress at several restaurants including Stowes & Jimmies. She married Mike on January 1, 1970. She helped Mike operate Boat Gannet Seafood on Grand Ave. until 1975. They moved the business to Hamden and in 1980 brought their business to Thurston Foods to help them with their new seafood division until 1986. In the early 90's she went to work for her brother in law Sal Ferraro, Sr. and his sons to help them with their newly added seafood section at Ferraro Foods in New Haven until her retirement in the late 90's. Jane had talents in many things including cooking, baking, sewing, gardening, arts and crafts, hair cutting, even homemade Halloween costumes. There was not much she could not do. Jane was very loving and giving and never forgot her great nieces and nephews and many of Michael's friends kids, sending cards at holiday's and birthdays and homemade personalized Gingerbread Men at Christmas time. When Jane took an interest in something, she learned all about it and helped her husband Mike compile his Western movie star collection, and her son Michaels baseball memorabilia & card collection. To describe Jane in one word selfless, she put others before herself and no matter how much pain she was in she never complained and just kept going. We would like to give a special thanks to the entire Ferraro family who always respected and honored their Aunt Jane. Being around the Ferraro's helped give her a happy life. Jane was born in West Haven December 24, 1937, daughter of the late Frank and Pauline Brewer. Her funeral will leave Sisk Brothers Funeral Home 3105 Whitney Ave. Hamden Friday at 9:30 a.m., Mass of Christian Burial at 10 a.m. in Blessed Sacrament Church. Burial in Beaverdale Memorial Park. Calling hours are Thursday from 4 - 8 p.m. In lieu of flowers contributions to Smilow Cancer Center PO Box 7611 New Haven, CT 06519-0611. To leave an online condolence please visit www.siskbrothers.com

The family of Jane F. Sarno created this Life Tributes page to make it easy to share your memories.

Send flowers to the Sarno family.