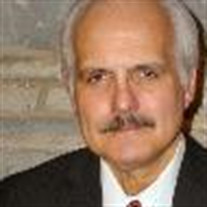 Hamden, CT - James R. Spinato (Jim), beloved husband of Elaine M. (Stanley) Spinato of 43 years passed away peacefully on April 27, 2016 at Connecticut Hospice. Born June 1st, 1951 in New Haven, CT to the late James J. Spinato and Dorothy Allen Spinato, Jim graduated from West Haven High School in 1969 and received a Bachelor of Arts degree in criminal justice and computer science from the University of New Haven. He retired from the Yale University School of Medicine in 2010 where he was a senior ITS developer for 16 years. Upon his retirement from Yale, Jim served as a private consultant, specializing as a Microsoft applications developer for online Upwork, a global freelancing platform. He combined his programming talents with his love for animals, helping to design and maintain the websites for the Friends of the New Haven Animal Shelter and Petfinder, an online animal adoption site. Besides his family, Jim was especially fond of English bulldogs, having owned four throughout his life. A typical afternoon was spent sitting on his front porch, laptop on his knees, smoking a good cigar, and having his bulldog by his side. His most recent dog, a rescued Chihuahua, enjoyed the same quality time. Jim’s interest in film noir was especially keen, often quoting some of the most memorable movie lines from a Raymond Chandler, Dashiell Hammett, James M. Cain, or Ben Hecht script. He often said that chatting with Robert Osborne, host of Turner Classic Movies, was his long time wish. His collection of ‘The Honeymooners’ episodes was a special favorite, with the antics of characters Ralph Kramden and his neighbor, Ed Norton, always lifting his spirits. During the summer months, Jim could be spotted riding his Harley-Davidson motorcycle along the shoreline, a journey he always loved. Besides his wife Elaine, Jim is survived by his son Paul J. Spinato of Clinton, CT, his sister Kathy Spinato-Grant of North Haven, CT, and brothers Gary and Billy Spinato, both of Boise, Idaho. He is also survived by 21 nieces and nephews and his special canine nephew, Butchie. The Spinato family would like to extend their heartfelt thanks to the staff at the Smilow Cancer Center at Yale-New Haven Hospital and Connecticut Hospice, where Jim received the most comprehensive, professional, and compassionate care. A Mass of Christian Burial will be Celebrated Monday at 10 a.m. in Our Lady of Mt. Carmel Church. Friends are asked to go directly to church. Calling hours are Sunday from 4 - 7 p.m. in Sisk Brothers Funeral Home 3105 Whitney Ave. Hamden. In lieu of flowers, please send memorial donations to the Friends of the New Haven Animal Shelter P.O. Box 9056 Brewery St. Station, New Haven, CT 06532 or Vista Life Innovations, 1356 Old Clinton Rd, Westbrook, CT 06498. To leave an online condolence please visit www.siskbrothers.com

The family of James R. Spinato created this Life Tributes page to make it easy to share your memories.

Send flowers to the Spinato family.