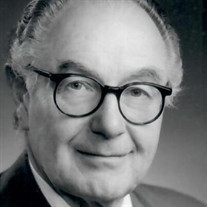 Jack Sandweiss, Member of the National Academy of Science of the United States and Donner Professor of Physics Emeritus at Yale University died peacefully in his sleep on November 19, 2020 in Hamden Connecticut at the age of 90. Jack was born in Chicago IL, on August 19, 1930 to Charles and Florence Sandweiss. After completing high school in Cleveland and moving with his family to California he spent 2 years at UCLA before transferring to Berkeley and pursuing his scientific interests in physics. After obtaining a B.S. in Physics in 1952 he continued at Berkeley earning his Ph.D. in experimental physics in 1957, subsequently accepting a position at Yale University. He retired from Yale in 2014. At Yale, Jack began as an Instructor and was a full professor within seven years. Jack loved Yale and in addition to his prominence in physics, he served the university and the community in a multitude of ways. He was a hard-working member of many committees, such as the Course of Study committee, and served as Master of Yale’s Davenport College in the mid-1970s. On his retirement, a Yale tribute called him a “superb member of the Yale community...part of the glue that holds this place together” and praised his service for helping “to close the cultural gap between the sciences and the humanities.” Jack was an internationally recognized and highly respected leader in experimental elementary particle physics, a field that epitomizes mankind’s search for an understanding of the basic constituents of matter and their fundamental interactions. He pioneered, soon after the discovery of the antiproton, in building beams of antiprotons at Brookhaven National Labs to study the properties of that then esoteric new particle. This led to the discovery of several new fundamental particles such as the anti-Xi hyperon. He followed this by equally pioneering beams of the even more esoteric sigma hyperons at Fermilab. He did groundbreaking work on fundamental symmetries of space and time by studying time reversal invariance in kaon decays at Argonne Labs and searching for parity violations in heavy ion collisions at Brookhaven. He also pioneered in elucidating and searching for a fundamentally new form of matter, atoms with unusual quark content called strangelets, both on Earth, in Moon Dust, and later in outer space. Jack’s outstanding success in research was recognized in myriad ways, perhaps most significantly by his election to the National Academy of Science of the United States in 1987. His prominence and influence in physics went beyond research, however. He served on many national and international committees and chaired the U.S. High Energy Physics Advisory Panel (HEPAP) from 1976 to 1988. Jack was also the Editor of the American Physical Society’s flagship publication Physical Review Letters from 1988 to 2013--the longest tenure of any editor of this leading journal. In the1956, Jack met and married Letha Boeck and together they raised 3 children; Daniel, Anne, and Benjamin. Jack and Letha were married for 57 years, until Letha passed away in 2013. Their home for many years on Ogden St. in New Haven was a well-known center for concerts by the Wall Street Chamber Players and other community events. For instance, for years he designed and helped build sets for children’s activities at Sunday in the Park, an annual event in Edgerton Park near the house. Jack enjoyed classical music and reading, particularly history, economics, thrillers, and, as a young man, science fiction, and he was an avid swimmer from college into retirement. Jack Sandweiss is survived by his children, their spouses, and his grandchildren: Daniel, Maria del Carmen [Rodriguez] and Andrew Sandweiss of Bangor, Maine; Anne Riz-Sandweiss, Thomas Riz, and Elena Riz of Bern, Switzerland; and Benjamin, Christin [Ciresi], and Serena Sandweiss of Hamden, Connecticut. He is also survived by his brother Bernard Sands and by many friends, colleagues, and former students. We will all miss him deeply. Arrangements with Sisk Brothers Funeral Home, 3105 Whitney Ave., Hamden, Ct. www.siskbrothers.com

Jack Sandweiss, Member of the National Academy of Science of the United States and Donner Professor of Physics Emeritus at Yale University died peacefully in his sleep on November 19, 2020 in Hamden Connecticut at the age of 90. Jack was born... View Obituary & Service Information

The family of Jack Sandweiss created this Life Tributes page to make it easy to share your memories.

Jack Sandweiss, Member of the National Academy of Science of...

Send flowers to the Sandweiss family.