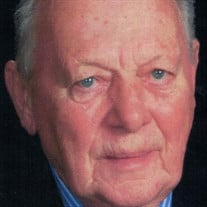 Mr. Harry Vincent O'Connell, 91, of Hamden passed away peacefully at home on Wednesday December 5th, 2018. Harry was born on July 30, 1927 in New Britain, the son of the late Michael V. and Florence Lambert O'Connell. He was predeceased by his beloved wife, Kathleen O'Day, his sister Rita, his brother John and his grandson Aidan. He is survived by daughters Margaret (Tom) Rathier of Windsor, Joan O'Connell of Boulder, Colorado and Mary Kate O'Connell of Hamden, as well as sons Mark O'Connell of Watertown, MA and John (Bridget) O'Connell of Beverly, MA. Harry leaves six grandchildren- Erin Annie and Marya Ruttenber, Andrew and Stephen Rathier and Isabel and Neave O'Connell. Additionally, Harry leaves many nieces, nephews, friends and neighbors. He will be missed dearly. Harry was a graduate of Trinity College, Hartford and Rensselaer Polytechnic Institute, Troy, NY and was a registered professional engineer. He served as a chairman of the Connecticut Chapter of the Institute of Electrical and Electronic Engineers. Prior to his retirement in 1991 he was an engineering manager at SNET where he worked for 39 years. He was a devoted parishioner of St. Rita Church, serving there as a Eucharistic Minister for many years. Harry was also a long-time volunteer for Habitat for Humanity, for which he received the President's Volunteer Service Award. Harry served in the US Army's Signal Corps, in Italy, at the close of World War II. Besides spending time with his family, Harry loved to read, especially about history, and to golf and travel. The family would like to thank James who took loving care of dad for several months. A Mass of Christian Burial will be Celebrated Tuesday at 10 a.m. in St. Rita Church 1620 Whitney Ave. Hamden. Burial in St. Mary's Cemetery. Friends may call Monday from 4 - 8 p.m. at Sisk Brothers Funeral Home 3105 Whitney Ave. Hamden. Memorials may be made to Birthright of Greater New Haven, 176 Campbell Ave; West Haven, Ct. 06516; St. Rita School 1601 Whitney Ave. Hamden CT 06517; or Habitat for Humanity of Greater New Haven, 37 Union Street, New Haven, CT 06511. To leave a online condolence please visit www.siskbrothers.com

Mr. Harry Vincent O'Connell, 91, of Hamden passed away peacefully at home on Wednesday December 5th, 2018. Harry was born on July 30, 1927 in New Britain, the son of the late Michael V. and Florence Lambert O'Connell. He was predeceased by... View Obituary & Service Information

The family of Harry Vincent O'Connell created this Life Tributes page to make it easy to share your memories.

Send flowers to the O'Connell family.