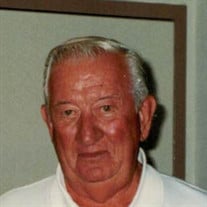 Harold F. Anderson, known to his friends as “Harry”, long time resident of No. Guilford passed away on September 5, 2017, just shy of his 90th birthday after a series of illnesses at Connecticut Hospice, Double Beach, Branford, CT, a building that he had a large part in designing and having constructed as part of the original Echlin Mfg. Co., where Harry was Senior Vice President of Manufacturing. Harry had worked at Echlin for over 40 years, working his way up from an excellent draftsman to Senior Management in Engineering under founder Jack Echlin. Harold traveled all over the world for Echlin, working on overseas manufacturing projects. He and his team were responsible for significant product introductions for the company over his tenure. His team holds numerous patents. Harold was born to August and Bridgit Moriarty Anderson in Fair Haven, CT. He is survived by his wife of 69 years, Adele (Shove); brother, John; sisters Marge Kent and Patricia Anderson; daughter, Kathleen Castellon of Branford and son, Kevin(Carole) of Downsville, NY. He is pre-deceased by brothers, William and Dennis and sisters Lillian Weidner and Betty Donavan. He also leaves grandchildren Stephen, Allison and Brian of Branford and grandson Ashley in South Miami; granddaughter, Christina(Nate) in Boynton Beach, FL with two great grandchildren (Annalise and Preston) and grandson Patrick (Catalina) from St. Petersburg, FL with two great grandchildren (Aiden and Sofia). Harold loved travel and was an avid outdoors person, loving fishing, (especially crabbing!), boating, hunting and working around his summer home in Wells, ME where he entertained his family and friends. He and his family had spent over 55 years living in North End Colony in North Guilford and attended St. George’s Church in Guilford. Friends are invited to go directly to St. Mary Church, Main St., Branford for a Mass of Christian Burial to be celebrated Saturday morning at 10:00 am. Burial will follow in All Saints Cemetery. Calling hours will be Friday from 4 - 7 pm at Sisk Brothers Funeral Home, 3105 Whitney Ave. Hamden. Memorial contributions may be made to The Alzheimers Assoc., 700 Executive Blvd., Southington, CT 06489-1058 or to CT Hospice, 100 Double Beach Rd., Branford, CT 06405. www.siskbrothers.com

Harold F. Anderson, known to his friends as &#8220;Harry&#8221;, long time resident of No. Guilford passed away on September 5, 2017, just shy of his 90th birthday after a series of illnesses at Connecticut Hospice, Double Beach, Branford,... View Obituary & Service Information

The family of Harold F. Anderson created this Life Tributes page to make it easy to share your memories.

Send flowers to the Anderson family.