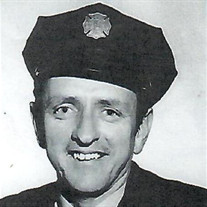 George B. McDermott Jr. (NHFD Ret.), born in New Haven, CT on November 3, 1925, died peacefully in his daughter’s home at the age of 94. Upon his high school graduation, George enlisted in the Army to join the Allied effort in WWII. During his time in the armed forces, George fought in the Battle of the Bulge, participated in the liberation of the Mauthausen-Gusen concentration camp, and was awarded multiple medals including a Bronze Star with two oak leaf clusters. After the war, George returned home and joined the New Haven Fire Department, where he was assigned to Hook & Ladder Truck No. 4 for most of his 37-year career. During his time with the department he earned five unit citations and three commendations by the Board of Fire Commissioners. Among George’s proudest moments were his rescue of a 4-year-old child on Butler St. in 1955 and his role in assisting fellow firefighters during the tragic Franklin St. fire. George was predeceased by his loving wife of 58 years, Marjorie O’Brien McDermott, his parents, George and Catherine McDermott, and his sister, Mildred Marshak. A devoted father and grandfather, George leaves behind daughters Kelly (Mark) Ryan of Clinton, CT and Kathryn (John) Hynes of Madison, CT to cherish his memory. George will also be fondly remembered by his grandchildren Gleeson, Conor, and Casey, as well as his extended firefighting family. His children would like to extend their heartfelt gratitude to the firemen, especially Andrew Bonito, his dear friend. Those who knew George will most remember his positive attitude, kindness, and gratitude for his life and family. Calling hours are on Sunday, January 19th from 3 to 6 pm at Sisk Brothers Funeral Home,3105 Whitney Ave., Hamden. A mass of Christian burial will take place at Our Lady of Mt. Carmel Church on Monday, January 20th at 11 am, followed by interment with military honors at All Saints Cemetery in North Haven. In lieu of flowers, please consider a donation to the First Responders Children’s Foundation at 38 East 32nd St., Suite 602, New York, NY 10016 www.siskbrothers.com

George B. McDermott Jr. (NHFD Ret.), born in New Haven, CT on November 3, 1925, died peacefully in his daughter&#8217;s home at the age of 94. Upon his high school graduation, George enlisted in the Army to join the Allied effort in WWII.... View Obituary & Service Information

The family of George B. McDermott Jr. created this Life Tributes page to make it easy to share your memories.

Send flowers to the McDermott family.