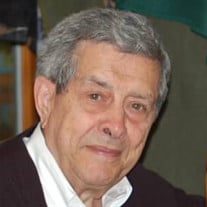 Gennarino L. Del Mauro (“Gene”) of Hamden passed away on November 18, 2019 at the age of 96. He was born in New Haven in 1923, the son of Anthony and Loretta Maturo Del Mauro. He attended Hillhouse High School in New Haven and, upon graduating in 1941, at the age of 18, enlisted in the Army as a member of its Corps of Engineers. He was shipped off to the Philippines and, later, Japan to construct and maintain military airstrips. Gene filled countless afternoons with family and loved ones telling fascinating stories of Army life—training in Boston, living in jungles, surviving air raids and monsoons, and “following MacArthur” aboard transport ships in the rolling Pacific. Upon being honorably discharged from the Army in 1946, Gene retuned to Connecticut and obtained his bachelor’s degree from the University of Connecticut in Storrs. Soon thereafter, Gene fell in love with Josephine Gentile Del Mauro also of New Haven with whom he corresponded from the University Wyoming, where he would obtain a master’s degree. He returned in 1954 to marry Josephine with whom he would spend the next 65 years. Gene’s taste for adventure took him and his new wife, Jo, to Casper Wyoming, where Gene spent weeks at a time outdoors, surveying the Rocky Mountains for the Forrest Oil Company and then Sunoco. Gene and Jo had their first two children, Eleanor and Loretta in Casper. Soon thereafter, toddler and baby in tow, Gene and Jo moved back to the New Haven area where they had two additional children Anthony, and Carol. Gene found his calling teaching science at Amity Middle School in Orange and at Southern Connecticut State University. Teaching was the perfect profession for Gene because he made his pure delight in all of God’s natural creations—the mountains, the seashore, the stars and planets, and the weather—irresistible to his students, some of whom kept in touch with him until he died. Gene is survived by his loving wife, Josephine, of Hamden, his daughter Eleanor and her husband Gilbert Murry of Guilford, his daughter Loretta Fracasse and her husband George, of Hamden, his son Anthony of Hamden, his daughter, Carol Johnson and her husband, Stuart, of Chester and his five grandchildren, George and Rebecca Fracasse and Eric, Bradford and Christopher Johnson, all of whom will miss him terribly. Gene embraced life and found something to enjoy about every minute of it. A good and faithful husband and father, he loved his family, his friends, and his country, and now inherits God’s perfect gift of life eternal. Funeral service will be held Thursday,Nov. 21,2019 at 10:30am in Sisk Brothers Funeral Home, 3105 Whitney Ave., Hamden. Burial with military honors will follow in Centerville Cemetery, Hamden. Friends may call Thursday morning prior to the service from 9:30 - 10:30 am. www.siskbrothers.com

The family of Gennarino L. Del Mauro created this Life Tributes page to make it easy to share your memories.