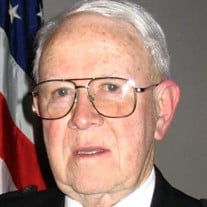 Frederick W. Saunders, of Wallingford and formerly of Hamden, passed away peacefully on July 31st, 2017 at YNHH. He fell at home on July 22nd and suffered numerous fractures that led to surgery then medical complications that he could not overcome. He was the loving husband to Kathleen Rynne Saunders whom he married on July 27th, 1954 at the Immaculate Conception Church in Lahinch, County Clare, Ireland. Their honeymoon consisted of a tour of all of Ireland’s counties, visiting Scotland and the highlands as well as family in England. • Fred was born in Dorchester, MA on October 10th, 1925. He was the son of the late William H. Saunders of Bloomfield, Prince Edward Island, Canada and Mary Moakler Saunders of Saint Louis, Prince Edward Island, Canada. His ancestors came from Fermoy, County Cork and County Tipperary, Ireland and Fred enjoyed researching his genealogy and helping others with their own search. Loving father of Mary Catherine Saunders of North Haven, Kathleen A. Saunders Lupone (Robert) of Wallingford, William F. Saunders of Bethlehem, NH, Sean P. Saunders (Janice) of Wallingford, Eileen R. Saunders of Wallingford, Michael R. Saunders of Hamden, and Kevin C. Saunders (Dawn Pearson) of Northford. Brother of Francis H. Saunders of Hamden and Rita-Marie Hannigan (Thomas) of West Hartford. Also survived by his 2 cherished grandchildren and was predeceased by his sister-in-law Lorraine Burke Saunders. A veteran of World War II, in his final year at Hill House High School, Fred received his diploma early, then set off on December 22rd, 1943 with the U.S. Navy to boot camp in Sampson, New York. He attended and graduated from the Navy’s radio school then left for the South Pacific on the SS James Gordon Bennet where they stopped at Pearl Harbour and continued on to Miline Bay, New Guinea. Upon receiving new orders he was bound for the Philippines on board the USS Cape Henlopen to the Leyte Gulf where he spent almost one year. He returned home for discharge on the USS Hambleton, DMS 20 to the discharge center in Rhode Island on May 20th, 1946. Upon discharge from the US Navy, Fred started at UCONN and was a graduate of the class of 1950 with his Bachelors’ Degree in Industrial Administration. His education continued and earned him an Associates’ Degree in Engineering in 1958. Education was important to Fred, he continued taking numerous courses that pertained to his career and various interests including the Dale Carnegie Course, Pratt and Whitney Training School, University of New Haven, and the United Nuclear Corporation. Prior to college Fred worked at Talon Zipper and Seamless Rubber. His career was fulfilled as an Industrial Engineer for the United Nuclear Corporation starting out with them in New Haven and continuing on with them through their move to Montville and subsequently their closing in 1991 after 35 years of service. The United Nuclear (UNC Naval facility) was originally operated by Olin in New Haven then later by UNC and AEC. Fred was an active member of the New Haven Gaelic Football Club, and the New Haven Irish-American Community Center. He was also a member of The Connecticut Irish-American Historical Society, Ancient Order of Hibernians – Division 7, the Paul Curry/James Seery Branch of Comhaltas Branch, Round table – The Knights of Saint Patrick, The Carmel Council of the Knights of Columbus, and the Hamden Elk’s Lodge. Fred had a passion for music and the bagpipes. He was a charter member of the New Haven Gaelic Highland Pipe Band that was started in 1968, where he served as their treasurer and the information source for all of the bands activities for many years. He taught numerous people the art of playing the bagpipes. He was well known in the community and performed with and without the band for all kinds of activities and events. Among the notable events, he was well known for his participation at the Saint Patrick’s Day Parade Ball since its beginning in New Haven that was sponsored by the New Haven Saint Patrick’s Day Parade Committee. He participated in this parade and so many others throughout his lifetime. Fred Saunders was a good, kind, thoughtful, smart, honest man who loved his family, country, history, roots and music. He loved to travel frequently to Ireland and Prince Edward Island to visit all his family and friends. He will be sorely missed but never forgotten. Funeral from Sisk Brothers Funeral Home 3105 Whitney Ave. Hamden Friday at 9:30 a.m., Mass of Christian Burial at 10 a.m. in Church of the Resurrection, Wallingford. Burial in All Saints Cemetery. Calling hours are Thursday from 4 - 8 p.m. In lieu of flowers contributions to the New Haven Gaelic Football & Hurling Club 9 Venice Pl. East Haven, CT. 06512. To view complete obituary and leave an online condolence please visit www.siskbrothers.com

Frederick W. Saunders, of Wallingford and formerly of Hamden, passed away peacefully on July 31st, 2017 at YNHH. He fell at home on July 22nd and suffered numerous fractures that led to surgery then medical complications that he could not... View Obituary & Service Information

The family of Frederick W. Saunders created this Life Tributes page to make it easy to share your memories.

Frederick W. Saunders, of Wallingford and formerly of Hamden,...

Send flowers to the Saunders family.