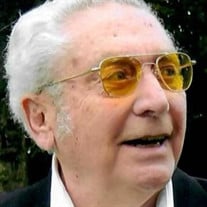 Edward J. Pantalena Sr. passed away peacefully March 29, 2021, at home surrounded by his loving family. He is now reunited in heaven with his bride 0livia. Ed was born on August 7, 1927 in New Haven, Connecticut. He was predeceased by his parents Frank and Mary Pantalena, brothers Frank and John Pantalena, and sister Mary (Frank) Sosnowski. He is survived by his loving children Elisa (Dennis) Pannone, Edward (Deborah) Pantalena Jr., Paul (Robin) Pantalena, David Pantalena, and Lynda (Jim) Bode; his eight grandchildren Christina, Stephen, and Danielle Pannone, Blake and Ryan Pantalena, and Gabby, Anthony and Jack Pantalena: his four great-grandchildren Nicholas and Lillian Maher and Arianna and Garrett Brown, his beloved nieces Marilyn (James) Pellegrino and Dorothy (Joseph) Lockwood. Also, his amazing care family Amanda "Mandy" Przybylowski, Dawn Raccio, and Cathy Cyr, whose unconditional love, care, compassion, and devotion will never be forgotten. Ed played football for Hillhouse High School and at Fordham University, where he was also a member of the Kappa Iota Pi fraternity. He left Fordham to serve as a Private First Class in the Second World War and was privileged to play on the Army Football team. He was Deacon for over 30 years for the Archdiocese of Hartford. He participated in the Knights of Columbus in Hamden and volunteered with many other local organizations. Ed was a dedicated father of five children and provided for his family with a determined, entrepreneurial attitude. His earlier endeavors included owning Ed's Kiddy Korner a children's clothing store, and Ed's Place restaurant, known for its authentic, homemade food, welcoming atmosphere, and great conversation. He then continued to provide for his family by holding positions at Quinnipiac University and Nestlé's Corporation until his retirement. Having held a position with Nestles, Ed and 0livia's house was known to be the most popular house to stop at on Halloween. It was here where you would receive full sized candy bars for both the trick-or-treating kids and their parents. It was hard to see who received more joy out of this simple gift, Ed, the kids, or their parents. Despite all these endeavors, none had brought him more joy than his marriage to 0livia, and the family they created. Ed was so devoted to his bride of 65 years, that he joined her in heaven only two short months after her passing. Ed was a thoughtful, loyal friend, who cultivated life-long relationships and could make a friend out of anyone. He and 0livia could be found every Friday making noise and surrounded by friends at the local dinner. He had a wry sense of humor and an infectious sense of optimism and gratitude for the little things. He delighted in trips to Saratoga Springs Race Track or to the casino. Ed tended dutifully to his apple tree and the rose bushes he grew to always have flowers for his bride. In his later years, Ed wielded a trademark shillelagh as he "putzed" around the yard and sat comfortably on his deck watching his friends (the birds, the squirrels, and the chipmunks) with his loyal companion Frankie by his side. Best remembered for his love of scratch-off tickets and his ever-present catchphrase "life is good". His knack for cutting one-liners was with him until the end (be careful of the mailman, he's a carrier!). While Ed was a man of few words, he made every one of the count. He will be deeply missed. A Mass of Christian Burial will be celebrated Tuesday morning at 11:00 in Our Lady of Mt. Carmel Church, Hamden. Private burial will follow in Centerville Cemetery, Hamden. There are no calling hours. In lieu of flowers, memorial contributions may be made to one of the following organizations, Friedriech's Ataxia Research Alliance, 533 W. Uwchlan Ave., Downingtown, PA 199335 www.curefa.org, Mikey's Way foundation, 2228 Black Rock Turnpike, Suite 311, Fairfield,CT 06825 or The American Diabetes Assoc., PO Box 11454, Alexandria, VA, 22312. Arrangements are with Sisk Brothers Funeral Home, 3105 Whitney Ave., Hamden. www.siskbrothers.com

Edward J. Pantalena Sr. passed away peacefully March 29, 2021, at home surrounded by his loving family. He is now reunited in heaven with his bride 0livia. Ed was born on August 7, 1927 in New Haven, Connecticut. He was predeceased by his... View Obituary & Service Information

The family of Edward J. Pantalena Sr. created this Life Tributes page to make it easy to share your memories.

Send flowers to the Pantalena family.