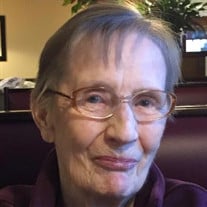 Edith Dierson, a fifty-one year resident of Hamden, passed away peacefully surrounded by her family and devoted caregiver, Dede Ajavon on the morning of Saturday, August 12 after a brief illness in Hospice care at Yale New Haven Hospital. She was 89 years old. Born Edith Grete Marie Dzierzon in New York City in 1927, she lived her first years in the city’s Manhattanville neighborhood. Her parents were Bruno Dzierzon and Grete (Phele) Dzierzon. As a small child, she occasionally traveled to Germany with her family to visit her grandmother. It was on one such visit that the Second World War began, necessitating Edith’s remaining in Germany until the war ended. Edith was married to Vladimir Luban on April 7, 1951 in New York, NY. Edith was certified as a Kindergarten Teacher in Hamburg, Germany in 1946. She earned a Bachelor’s Degree, Cum Laude, in Art Education from Southern Connecticut State University in 1968 and continued with graduate studies in Early Childhood Education in 1971. She received a certification in Massage Therapy at Rocky Mountain Healing Arts Institute in Boulder, Colorado in 1978. Edith continued with graduate level education in Gestalt Theory and Practice at the New Haven Center for Human Relations, and Counseling at Beacon College, Washington DC between 1979 and 1982. With her talent and university training, Edith produced numerous artistic works in the form of sketches, oil and watercolor paintings, pottery, and clay and metal sculpture. Edith had broad work experience in several occupations throughout her working years. She was a children’s Art Teacher, a Social Worker in a convalescent home, a developer of programs in the therapeutic professions, and operated a private practice for Counseling and Integral Body Therapy. Edith employed her crafting and business skills to design, produce, and market a line of handmade stationary and desk accessories. Always a lover of art, Edith opened a fine arts and folk crafts store in 1974 named The Artisan on Whitney Avenue in Hamden. A lover of water, Edith looked forward to swimming, camping, and trips to Hammonasset Beach with her children and her grandchildren. In the summer of 1967, she traveled to Europe with her sons Peter and Neil, purchased a camper, and the three traveled through Germany, the Netherlands, and the Scandinavian countries. She found endless hours of enjoyment in reading for education and enrichment throughout her long life. Edith often enjoyed lunches and dinners with her family at her favorite diner, the Hamden Townhouse. Edith is survived by her daughter Nina Luban of Hamden, and son Neil Luban (Patrice) of Colebrook, CT. She was beloved Omi to grandson Jason Luban of Broad Brook, CT, and granddaughter Christina Luban of Boulder, CO. She is also survived by her brother, Dieter Dzierzon of Germany and several nieces, nephews and cousins. She was predeceased by her son Peter Luban and her brother Hubert Dzierzon. A memorial service and wake will be held on Sunday, August 27 at the Sisk Brothers Funeral Home at 3105 Whitney Ave., Hamden, CT between 1 and 4 PM. In lieu of flowers, donations in memory of Edith may be made to the Whitneyville Branch Library, 125 Carleton St., Hamden, Connecticut 06517.               

Edith Dierson, a fifty-one year resident of Hamden, passed away peacefully surrounded by her family and devoted caregiver, Dede Ajavon on the morning of Saturday, August 12 after a brief illness in Hospice care at Yale New Haven Hospital.... View Obituary & Service Information

The family of Edith Dierson created this Life Tributes page to make it easy to share your memories.

Edith Dierson, a fifty-one year resident of Hamden, passed away...

Send flowers to the Dierson family.